Railway line to be constructed between Turkey and Iran 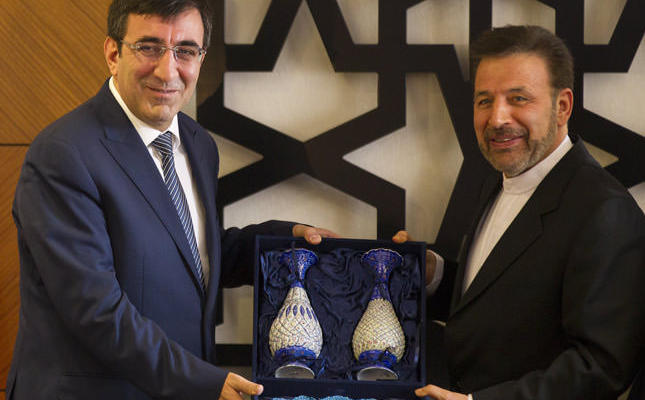 by Compiled from Wire Services Jan 15, 2015 12:00 am
During his visit to Turkey yesterday, Iran's Communication, Technology and Correspondence Minister Mahmud Vaizi announced that an agreement has been reached to construct a new railway line between Iran and Turkey. Noting that both countries have great economic potential, Vaizi stated that the countries are striving to establish new collaborations to reach the $30 billion foreign trade targets.

The Iranian minister, who met with Development Minister Cevdet Yılmaz during his visit, noted that along with the deal for the railway, the countries also accepted a permanent solution for eliminating various issues faced by truck drivers carrying goods between the two countries. "I hope our agreement will relieve truck drivers and, in general, the transportation sector operating between Iran and Turkey. There is no obstacle standing in the way of improving relations between both countries, and we are all willing to improve cooperation in all fields," added Vaizi.

Yılmaz also stated that while relations between the two countries have improved when compared to 12 years ago, it still wasn't at the desired level. Noting that the current trade volume for 10 months with Iran is around $11.3 billion with investments by 174 Turkish companies, mutual investments can and should also be increased.

On the preferential trade agreement to be signed with Iran, Yılmaz underlined the importance thereof and noted that such a step will not only benefit Iran and Turkey but will also contribute to economic growth and stability of the whole of the Middle East. Vaizi also noted that the preferential trade agreement would mark a new era in economic cooperation between the two countries.

On the recent conflicts between the two countries concerning price differences for crude oil, Yılmaz said that now a mutually beneficial agreement has been reached that will enable both countries to obtain higher shares and that will benefit the transportation sectors of both countries.

Vaizi pointed to Economy Minister Nihat Zeybekci's suggestion that Iran and Turkey use their local currencies for trade transactions during his visit to Iran and that Iran has agreed to this suggestion. "I will inform him of our decision to accept the use of local currencies during trade between both countries. We all have to strive to reach the $30 billion foreign trade volume target mentioned by the presidents of both countries," added Vaizi.