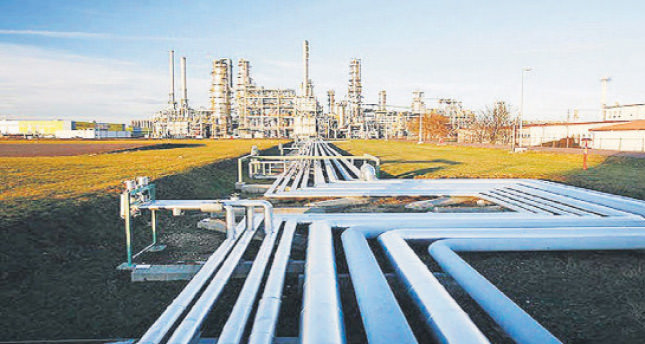 Sergey Gorkov, deputy chairman of the Board of Directors of Sberbank, has announced that they are willing to invest in the financing of the natural gas pipeline project, which was known as the South Stream project and cancelled in December 2014 and planned to go through Turkey, and now known as the Turkish Stream.

Speaking to Anadolu Agency (AA) at the World Economic Forum (WEF) in Davos, Gorkov further underlined that they are financing many mega projects, including the third airport and the Akkuyu Nuclear Power Plant in Turkey. Sberbank has also owned 99.85 percent of Turkey's Denizbank since 2012.

To a question about the financing of the new pipeline with a capacity of 63 billion cubic meters that was first discussed during Russian President Vladimir Putin's visit to Turkey in December and that will go through Turkey, Gorkov said that they will discuss project financing with the related parties. "We have not made any decisions yet, but we are willing to invest more in Turkey, and since Gazprom is one of our clients, we are ready to discuss it," Gorkov said.

On whether government-owned shares of Sberbank, which is Russia's largest bank, will be offered to the public, Gorkov said that this year might not be a good time to make any sales due to the depreciation of the ruble.

Gorkov praised the performance of their affiliate in Turkey, Denizbank, and noted that Denizbank was named the World's Most Innovative Bank in the 2014 BAI Finacle Global Banking Innovation Awards, organized by the Bank Administration Institute (BAI), which is regarded as one of the most reputable institutions in the finance sector and by the American Banking Association (ABA). He further noted that at the moment they were not planning on a public offering of Denizbank.

On Turkey's economic performance, Gorkov noted that while there is little economic growth observed in Europe this year, Turkey is growing fast, and he also defined Turkey as a "gold island" between the Middle East and Europe.

Gorkov also discussed the effect of United States sanctions on the Russian economy and underlined that while they have not observed any critical effects, they are expecting them this year as the positive economic growth last year cannot be sustained and economic shrinkage is expected in 2015. However, he also noted that the most critical factor that will define the situation of the Russian economy is the price of crude oil and therefore, Russia is not currently changing its international and local policies. Gorkov also noted that how the decrease in petrol prices will affect Russia is hard to predict and added that while the price of crude oil is around $40 per barrel, they are expecting it to rise towards $80 near the end of this year.

It was confirmed once again that Brussels is still disturbed because of the cancellation of the South Stream project, which was supposed to transfer gas via Bulgaria. European Commissioner for Energy Union Maros Sefcovic claims that the new natural gas pipeline project, which is to transfer gas to the Turkish-Greek border without involving Ukraine, will not work.

Sefcovic indicated that 63 billion cubic meters for the new pipeline is more than what Turkey and the EU demanded. During Sefcovic's visit to Russia last week, Alexei Miller, the CEO of Russian state-owned gas giant Gazprom, declared that their agreement with Ukraine in which EU provides natural gas will end in 2019. After that if EU wants to continue to buy Russian natural gas, they'll have to build a pipeline to the Turkish-Greek border. Speaking to The Wall Street Journal in Davos on Friday, Sefcoviç said Russia should reconsider that option and create economic solutions for European partners, which would work.

The EU and Eastern European countries should focus their own strategies on securing energy supply said Sefcovic and added that Ukranian natural gas company Naftogaz could only get 33 percent of its natural gas from Russia in December compared to 95 percent the previous year.

Sefcovic further indicated that energy ministers of the region would gather in Bulgaria on Feb. 9 to work on an energy master plan. Also, the European Union is expected to publish a draft plan on its "energy union" vision in February, which projects building a pipeline between EU countries. This vision was the project of Sefcovic's five-year term.

The European Commissioner underlined that they are sick and tired of worrying about having enough energy supply in winter. "The world's biggest economy should not have a concern like this, and a customer should not worry whether or not someone transfers natural gas, while paying 400 million euros per year," Sefcovic said.