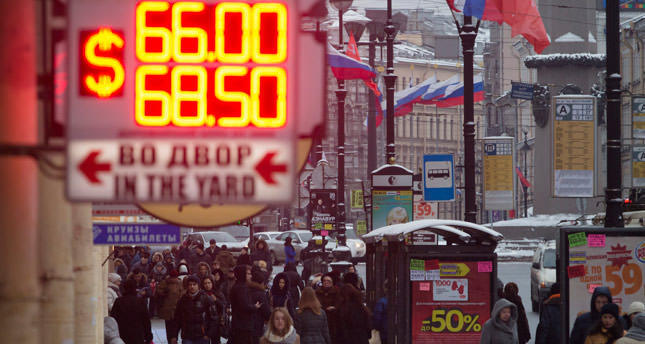 After Fitch and Moody’s cut Russia’s economic outlook, Standard & Poor’s downgraded Russia’s rating to BB-, a non-investment grade, with a new budget recovery plan from the government on the way

After a top ratings agency cut Russia's credit grade to "junk" status, the government in Moscow yesterday announced a plan that will see the economy return to a budget surplus in 2017. Standard & Poor's downgraded Russia's rating to BB-plus late on Monday, a non-investment grade, for the first time since 2004, citing a slide in the ruble and weakening revenue from oil exports. The agency said Russia's financial system is weakening, limiting room for maneuver for Russia's Central Bank.

Russia's economy has been hit hard by the double impact of weaker energy prices and Western sanctions over its role in Ukraine. It is expected to contract by 4 to 5 percent this year for the first time since 2009, when the economy was hit by a global crisis. Capital outflows, which averaged $57 billion annually during 2009 to 2013, soared to $152 billion last year. Foreign currency reserves have dropped below $400 billion for the first time since August 2009.

Finance Minister Anton Siluanov announced yesterday that the government has adopted an anti-crisis plan that will freeze the level of spending. The plan also sees the budget returning to a surplus as soon as in 2017 and the government preparing structural reforms "so that we do not burn recklessly through Russia's sovereign reserves."

Siluanov criticized S&P for being too pessimistic and added that the agency did not know about the government's upcoming plan when they made the decision. Mikhail Kasyanov, Russia's prime minister in 2000-2004, says S&P's move is a reflection of how Western leaders feel about Russia's economic prospects and its president, Vladimir Putin.

"With the current government there will be no return to the old days neither for the rating, nor for the global cooperation," Kasyanov told The Associated Press. "Not a single Western country barring a few politicians who are on their way out have any trust in Putin." The ruble was 1.2 percent lower against the dollar at 68.1 per dollar in early trading Tuesday while the MICEX stock index was 0.3 percent higher. The ruble is now worth half as much as a year ago.

Neil Shearing, chief emerging markets economist at Capital Economics in London, said in an emailed note that the ruble has not fallen even lower on Tuesday because the rating cut was largely anticipated: "Given the dramatic deterioration in the economic outlook over the past six months it was always a matter of when not if the ratings agencies took action." Moscow-based investment bank Sberbank CIB said in a note to investors that the long-term market reaction to the downgrade depends on if or when the other two major ratings agencies, Fitch and Moody's, will cut Russia's grade to non-investment. Many global investment funds will not hold debt that is classified as junk by two of the three agencies. Sberbank said investors have already priced in the S&P move. "Moreover, some investors have even postponed Eurobond purchases with the expectation that a rating downgrade would lead to lower prices, making them more attractive," the bank's Alexander Kudrin said in the note. "That said, if another agency follows S&P's lead, the negative reaction could be more pronounced."