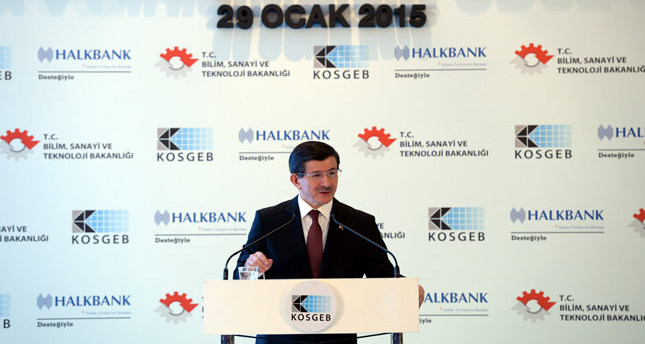 by Daily Sabah Jan 30, 2015 12:00 am
In order to help small and medium-sized enterprises to expand overseas, TL 150,000 ($62,302) will be provided to each business and TL 300,000 to groups of three formed for technological cooperation, according to the announcement by the government. Furthermore, R&D and innovation incentives will be increased by 50 percent for women, the disabled and the relatives of martyrs and veterans. 40 small- and medium-sized enterprises (SME) will also be awarded with an overseas visit. Prime Minister Ahmet Davutoğlu announced five pieces of good news for SMEs as well.

Speaking at the third SME and Entrepreneurship Award Ceremony, Davutoğlu said that SMEs are the backbone of both the economy and social life due to the employment and economic development they provide. Thus, any kind of incentive or steps taken to support SMEs will also improve social life and social welfare.

He stressed that his visits to Europe demonstrates that there is great trust and confidence in the Turkish economy. "The last statistics indicate that there is global agreement that the Turkish economy is stable, Turkey will continue to grow and improve, the inflation and interest rates will decline and, most importantly, Turkey has established political confidence and stability," Davutoğlu said.

According to Davutoğlu, there is a direct link between the strength of SMEs and political stability as shown by the 2008 economic crisis. Although many European countries suffered during that time, Turkey preserved its political stability and implemented many reforms because of its strong SMEs.

"As long as SMEs are strong, the government will help resolve the problem of unemployment. As long as there is a strong, stable government in Ankara, SMEs will also continue to be powerful," Davutoğlu added.

He announced that in order to support SME expansion overseas and compete in global markets, the government will be initiating an institutionalization and branding support program. He highlighted that while SMEs might succeed on their own, without institutionalization, their scale will continue to remain small. Moreover, the government will provide TL 150,000 to businesses striving to become a brand.

The second incentive includes collaborations provided to three businesses established for technological cooperation. "TL 300,000 non-repayable and TL 1.2 million repayable - TL 1.5 million worth of total incentives - will be granted to such groups," Davutoğlu said. Additionally, the small and medium industry development organization (KOSGEB) will be increasing the incentives it provides for R&D, innovation and industrial applications by 50 percent. Additional incentives may also be provided depending on the extent and focus on high-technology projects.

The fourth incentive is increasing the entrepreneurial support program for women and the disabled from its current 10 percent limit to 20 percent; relatives of martyrs and veterans will benefit from this opportunity as well. KOSGEB will also be giving an overseas trip as a gift to 40 finalists at the award ceremony. "There is proportional relation between entrepreneurship and competition. Competition will increase as much as entrepreneurship does," Davutoğlu said.