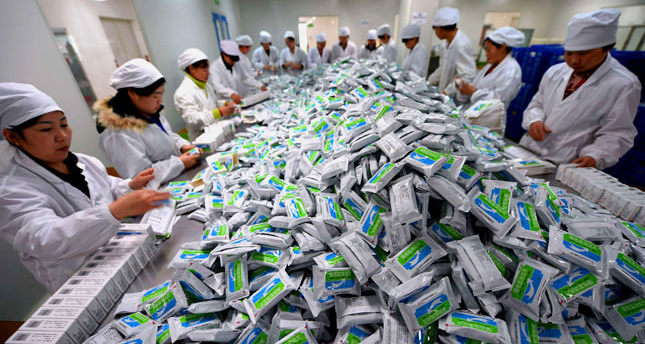 China has overtaken the U.S. as the top destination for foreign direct investment for the first time since 2003. Last year, foreign firms invested $128 billion in China and $86 billion in the U.S.

China overtook the flagging United States to become the top destination for foreign direct investment (FDI) last year, according to the United Nations economic thinktank UNCTAD. The United States has long been the world leader in attracting FDI, traditionally made up mainly of cross-border mergers and acquisitions and new corporate projects overseas, but last year its net inflows fell by two-thirds to $86 billion, preliminary data published on Thursday shows.

That was largely down to a deal between U.S. firm Verizon Communications Inc and its British partner Vodafone, which included a share buyback that reversed $130 billion of foreign investment out of the United States. Meanwhile China's share of global FDI has been creeping up, reaching $128 billion last year. James Zhan, director of UNCTAD's investment and enterprise division and lead author of the annual report, said the U.S. figure might rebound this year but China's rise had momentum, with a change in the kind of projects attracting FDI there.

"There's an increase of FDI into the services sector, and a slowdown of growth into manufacturing. And within manufacturing, investment into high tech is growing while labour intensive FDI has been declining," Zhan said. Moreover, a new draft foreign investment law pointed to a liberalising trend that would make China even more attractive, even though some sectors would remain off-limits for foreign investors, he said.

"They are going for the regulatory model like the U.S. and Europe, (moving) from the traditionally tightly controlled tight screening of a project-by-project approval review model, into a more liberal model."

The fragile world economy, hesitant consumer demand, currency volatility and geopolitical instability could all deter investors, the UNCTAD report said. In 2014, many economies saw an increase - including the European Union, which attracted $267 billion, 13 percent up from 2013, and India, with a 26 percent surge to $35 billion.