Super Bowl, the most lucrative sports venture of all time 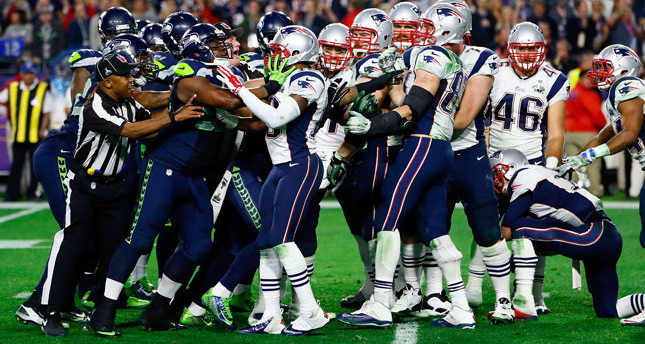 While The New England Patriots won their first Super Bowl in 10 years, this year’s Super Bowl is set to rake in the highest amount of retail spending of any game in history, as more than 800 million viewers watched the thrilling final worldwide

The super Bowl was not just watched by Americans. From Rio to Tokyo, sports fans flocked to watch the NFL's showpiece game on Sunday night. And stars converged on the Super Bowl both on and off the field, with Britney Spears and Mark Wahlberg among the celebrities who watched the game as well as the elaborate halftime show by Katy Perry.

Make no mistake, the Super Bowl is sport's most profitable organization considering the ratings it received. More than 800 million viewers watched the thrilling final between the New England Patriots and the Seattle Seahawks. The New England Patriots overcame the "deflate-gate" row to beat the Seattle Seahawks 28-24 in the Super Bowl. Despite trailing 24-14, they rallied to become the first team in Super Bowl history to trail by double digits in the second half and win.

But the real history belongs to the Super Bowl organization itself. According to the National Retail Federation (NRF), the final is estimated to contribute $14.3 billion to the American economy thanks to advertisements, ticket sales and other incomes. It is also estimated that the game creates $19.5 billion in job volume and is the most profitable sports operation around.

A 30-second advertisement aired during the broadcast of the Super Bowl game went for the cool price of $4.5 million. Tickets to the game were sold for up to $8,000.

Per person, consumers are expected to spend an average of $63.87 on game-themed merchandise and food, up from $59.33 in 2013. As game watchers gear up for their Super Bowl parties and events, the NRF estimates that 71 percent of Super Bowl-related spending is for food and beverages, 9 percent for team apparel, 6 percent for decorations, and 2 percent for electronics and TV's.

According to a new survey by the Retail Advertising and Marketing Association conducted by BIGinsight, 173 million people watched the game in the U.S., up from an estimated 171 million in 2013.

Meanwhile, similar to many Wall Street bankers who receive performance-based bonus compensation, NFL players who make it into the postseason are rewarded with bonus checks as part of the postseason shares that the NFL distributes. Each season, the NFL sets a predetermined amount to compensate players based on how far their team goes in the playoffs. The bonuses kick in with the wild card and divisional playoff games and grow incrementally as players fight for the ultimate prize, the Vince Lombardi trophy.

Each player on the losing team's 53-man roster is guaranteed a bonus check of $49,000 just for being there. For the winning team, the prize is a little sweeter, with a payout this year of $97,000, according to the 2014 NFL Media Guide. That means the journey from divisional leaders to Super Bowl champions pays out a total of $165,000 this year, a 5.1 percent increase from last season. With the average salary on the New England Patriots and Seattle Seahawks at $2.1 million, and the median salary at approximately $765,000, the bonus can make a significant difference depending on the player.

In Turkey, The Super Cup Final alone made a TL 20 million contribution to the country's economy in 2014. The annual Super Cup football match is contested between the previous season's Super League champions and the Turkish Cup winners in Turkey. Turkey's Super League has a TL 551 million turnover and is ranked seventh in terms of turnover among European leagues.