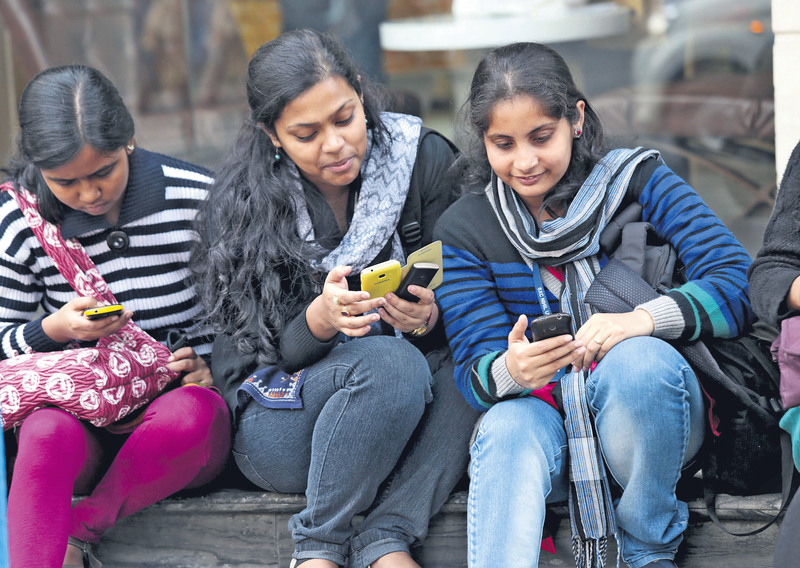 by Mar 03, 2015 12:00 am
Telephone and Internet firms are rolling out cheaper handsets and may turn to hot-air balloons to boost network coverage in developing countries where sales of smartphones are booming. Even though mobile network coverage is generally weaker in the developing world, firms are mining a gold rush of new clients in China, India and beyond as smartphone demand slows in more wealthy countries.

Several top telephone and Internet companies attending this week's Mobile World Congress in Barcelona, the biggest wireless telecom fair on the planet, have unveiled new products aimed at developing markets. Smartphone sales grew by 23 percent worldwide in 2014 to 1.3 billion units, according to a study by German research institute GfK. As demand has slowed in smartphone-saturated markets such as Western Europe, Japan and North America, it has exploded in Latin America, Southeast Asia and Africa.

In response, U.S. online giant Google has launched a low-cost smartphone in India for $105. Its U.S. rival Microsoft says it plans one that will cost $29 while the Mozilla foundation, owner of the Firefox search engine, plans one for $25. The world's biggest seller of smartphones, South Korean firm Samsung, has also launched products tailored for the Indian market, as its major U.S. competitor, Apple, focuses on its higher-end iPhone line. The rise of budget smartphones has also been driven by manufacturers such as Xiaomi of China, which overtook Samsung for sales in the Chinese market last year. By 2020 about three-quarters of the world's smartphones are expected to cost less than $100, consulting group Gartner estimated in a study.

"You get good lower-end smartphones for $20 and the higher end for the mass market is now around $60," said Sigve Brekke, Asia director for Norwegian telecom group Telenor, which operates in six countries in the region. "We think that we will see these prices continue to fall this year."

He forecasted that there would be smartphones connected to the 4G mobile network - currently the most advanced - for $45 by the end of this year. It's not just about the price, though. In areas where home computers are scarce "a smartphone is often the only way to get on the Internet," said Annette Zimmermann, a telecom specialist at Gartner. Smartphone users in such markets typically demand common messaging and social applications such as Facebook and Whatsapp, online radio, a flashlight, text messaging and a reliable battery, she said. Consumers in developing markets also often want a phone with two or three SIM network cards so they can switch between different telecom operators to get the cheapest rates, or share the phone with other users. Network coverage infrastructure still puts limits on what smartphones can do, however. Many districts, particularly rural ones, only have 2G coverage as standard, which offers relatively low capacity to transfer data. It can handle emails and basic versions of apps, but not much more. Some 60 percent of users in Africa are restricted to 2G, according to the GSMA world phone sector consortium.

It expects the number of smartphone users in the world to swell to more than 3 billion by 2020, compared with 2.2 billion in 2013. To improve coverage in remote parts of the world, Google has also proposed deploying hot-air balloons or drones equipped with network cells to areas where telephone lines and towers do not reach. The giant U.S.-based social media network, Facebook, has also partnered with several telecom companies to expand Internet coverage for customers in developing rural areas. "We're trying to help people connect with other people and share with each other," Facebook's founder Mark Zuckerberg told an audience at the congress on Monday.
Last Update: Mar 03, 2015 11:55 pm
RELATED TOPICS