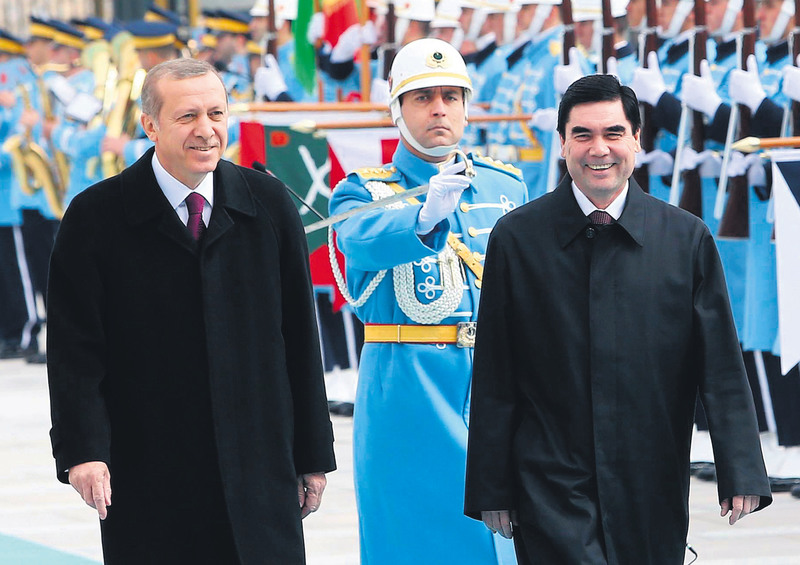 Praising the 26 percent increase in last year’s trade volume between the two countries, the Turkish and Turkmen presidents agree on further cooperation on energy, natural gas in particular, and security to sustain stability

During a joint press conference held with Turkmenistan's President Gurbanguly Berdimuhamedow, who came to Turkey for a series of official talks, President Recep Tayyip Erdoğan said, "In the future as well, we will continue to work with and be in close consultation with Turkmenistan for the prosperity, stability and security of the region." Erdoğan said that commercial and economic relations with Turkmenistan pursue a positive trend. During the talks, Erdoğan and Berdimuhamedow exchanged views on bilateral relations as well as regional and international issues that are of concern to the two countries. "In particular, we had a chance to discuss what we can do to fight terrorism," Erdoğan added, and expressed his determination to strengthen relations with Turkmenistan in all fields, including the economy, agriculture, energy and transportation in the upcoming period as well.

Reiterating that he held sincere bilateral talks with Berdimuhamedow, Erdoğan underscored that Turkey's cooperation with Turkmenistan, particularly in the fields of transportation and energy, lends a strategic dimension to relations.

Touching on Turkmenistan's special position in connecting Central Asia to international markets via the Caspian Sea, Erdoğan stressed that the two leaders exchanged ideas on carrying Turkmenistan's gas to European markets via Turkey. The energy ministers of the two countries also discussed the particulars of the matter. "We have once again seen that Turkey and Turkmenistan have the same vision on this critical issue," Erdoğan said, who also announced that the first meeting of the triple mechanism for Turkey, Azerbaijan and Turkmenistan, which was created for energy issues, will be held in Turkmenistan.

Highlighting that the total value of projects undertaken in Turkmenistan by Turkish contractors has reached $46 billion, Erdoğan thanked Berdimuhamedow and Turkmen citizens for their support.

Berdymukhamedov said that the operations of Turkish businessmen in Turkmenistan are very important. "The trade volume between the two countries increased by 26 percent last year, which is very pleasing. Also, the projects of the Turkish International Cooperation and Development Agency are significant to us," he said.

Arriving in Turkey to hold official talks, Berdymukhamedov met with Erdoğan at the Presidential Palace. Berdymukhamedov remarked that they discussed international and regional problems besides mutual cooperation opportunities, and he stressed that both countries had a similar point of view. Saying that this year is the 20th anniversary of the neutrality policy of Turkmenistan, Berdymukhamedov emphasized, "The neutrality policy is very important for us. We invite you to a conference that will be held for this purpose in Turkmenistan on December 12, 2015." He said that they would also attend the commemoration ceremony that will be held for the 100th anniversary of the Battle of Gallipoli.

Berdymukhamedov said that the two leaders give huge importance to energy and transportation, and they receive support from the international community to solve the problems in those fields.

The Turkish Cooperation and Coordination Agency (TİKA) opened its first office abroad in Turkmanistan's capital, Ashgabat, and carried out different projects in areas such tourism, agriculture, livestock breeding, education and health. TİKA is now working on finding the grave of Sultan Alpaslan, the second sultan of the Seljuk Empire, which Erdoğan mentioned during his speech as a very meaningful project that will satisfy a page of the ancient heritage of Turks. According to data released by the Turkish Statistical Institute (TÜİK), the bilateral trade volume between Turkey and Turkmenistan in 2014 was $2.9 billion, which includes $2.2 billion in Turkish exports. The main Turkish export items to Turkmenistan are iron and steel, which are used in the construction sector. There are also 300 Turkmen students who study in Turkey with the assistance of governmental scholarships.