Syrian refugees to be provided land for agriculture 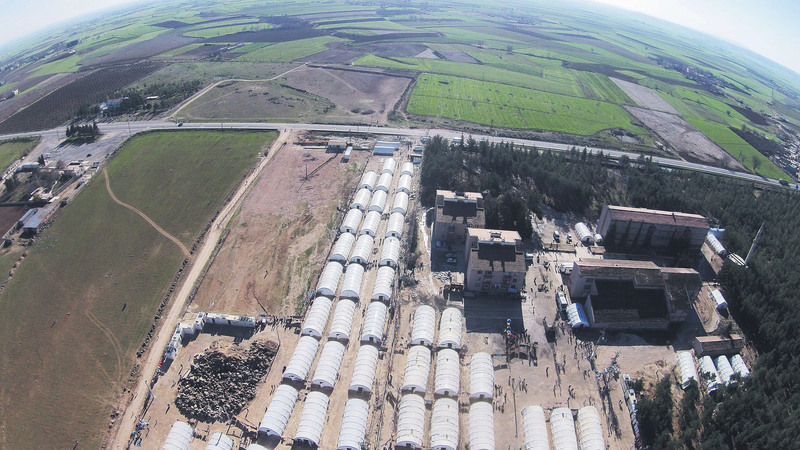 Syrian refugees living in the refugee camp in Suruç will be given small plots of formerly fallow land to cultivate. Each family will be given 100-square-meters of land to farm and they will be able to sell what they grow

The Provincial Coordinatorship of the Syrian refugee camp in Suruç has prepared a project that will open up a 700,000-square-meter area to agriculture, provided the required legal permission is obtained. One hundred square meters will be given to each refugee and Syrians will be able to sell what they plant and earn money. The Suruç Syrian Refugee Camp will be opened by President Recep Tayyip Erdoğan together with his wife, Emine Erdoğan today.

The project will be implemented in order to benefit from the 700,000-square-meter area located next to the refugee camp, which was established on a one-million-square-meter area and left uncultivated for years, for Syrian refugees to have an opportunity to earn a living. The irrigation structure will be established by using the recycled waste water from the camp.

In the camp, where 7,000 tents and 35,000 refugees are hosted, each family will have 100 square meters to cultivate. In addition, agricultural training will be given to the refugees. While refugees can provide food for themselves, they will also contribute to the economy. The authorities said that the project has been submitted to the related ministries and they will initiate it as soon as the legal procedure is completed.

The authorities have noted that currently it is illegal for Syrian refugees to cultivate land, yet such an obstacle can be easily removed with an amendment, thus turning barren land that has been unproductive for years into a profitable, productive area. Since the project proposes to use the waste water from the camp, such problems will be eliminated and further, due to the moderate climate conditions, grains and vegetables can easily be planted on the land. "The government is currently providing TL 85 just for grocery shopping to the Syrian refugees in the camp. If they can cultivate their own food, such aid will be unnecessary," added the camp authorities.

Syrian refugees were said to be pleased with the proposed project and noted that their mood will improve since currently they have too much free time and no jobs. Mahsun Akdeniz, who has been practicing medicine at the camp for five years, said that since the Syrian refugees have fled from war, their psychological state has deteriorated. He further noted that they are living in 10-square-meter tents without anything to do and therefore such a project will keep them occupied. "What we encounter the most is stomach and intestinal diseases, which are usually caused by psychological trauma," added Akdeniz.

One of the Syrian refugees, Ahmed Nabu, said that he had been a farmer in Kobani, but that he had fled from there. He said that since no one knows him here and since he didn't have any other occupation, he is not being productive even though he is still young.

Medine Hammed, also from Kobani, added that they want to work and contribute to the Turkish economy.

Another Syrian refugee, Muhammed Berkel, said that he has been in Turkey for the last five months and that he owned land in Syria and used to plant cotton seeds, wheat and grains in Syria. "We are very bored. If this project is implemented I would work day and night. The land here is much more fertile than our land in Syria," added Berkel.