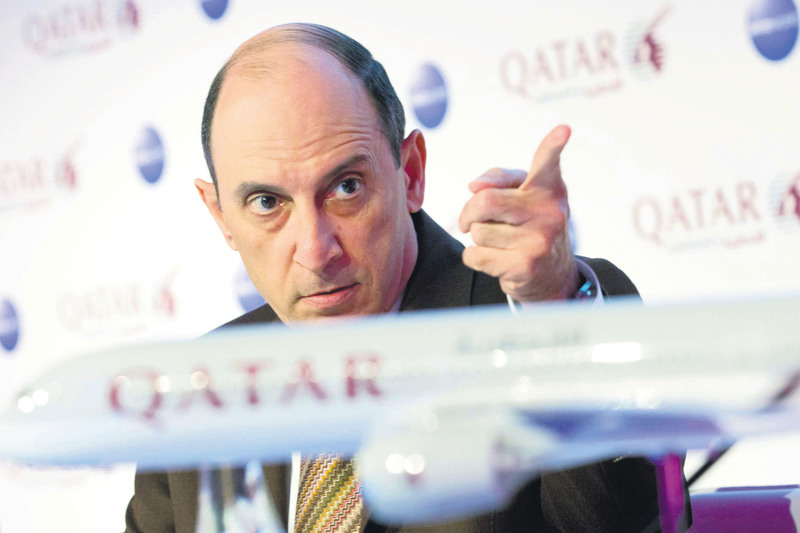 by Mar 05, 2015 12:00 am
Qatar Airways would like to raise its stake in the owner of British Airways and Iberia at some point and may invest in other well-run airlines, its chief executive said on Wednesday. Qatar Airways bought a 9.99 percent stake in International Consolidated Airlines Group (IAG) in January, aiming to forge closer ties to a company with two major European hubs and strong transatlantic networks. Asked whether Qatar Airways would like to buy more of its oneworld partner, Chief Executive Akbar Al Baker said: "Yes, we would like to increase our stake in IAG at a later date. We have just taken a shareholding: we could add value to them and they will add value to us."

Qatar Airways will also keep investing in other well-managed carriers to diversify its income from the main airline.

"We will look at other acquisitions of airlines but we look at airlines that don't take the resources of Qatar, or attention of Qatar management, to fix issues. We will always go after goldsmiths, not scrap dealers." That could include India's IndiGo, if any of the privately-owned budget carrier became available to buy.

"I think domestic airlines in India are inefficiently run. The only one efficiently run is IndiGo. If we have the opportunity to acquire a stake in IndiGo we shall be very pleased to do so," Al Baker said. He was speaking at a news conference during ITB Berlin, the world's largest tourism fair. The fast growth of Qatar Airways and two UAE carriers, Emirates and Etihad, has redrawn the aviation map around the Gulf, putting those carriers at odds with some Western rivals.

Three major U.S. airlines claim in a recent 55-page dossier sent to U.S. government officials and lawmakers that Gulf carriers received $40 billion in subsidies and want the Obama administration to renegotiate Open Skies agreements. Gulf carriers deny receiving subsidies. Al Baker challenged the U.S. airlines to publish their allegations and accused them of receiving "backdoor subsidies" through Chapter 11 bankruptcy protection. "They want to serve their alliance partners at the cost of us three Gulf carriers. We are not going to go away," he said.

Qatar Airways took delivery of its second Airbus A350 on Wednesday and expects to receive seven more this year. It has ordered 80 of the long-haul jet, which is designed to compete with the Boeing 787 and 777. Al Baker said performance and dispatch reliability of the first A350, delivered in December, had exceeded expectations.