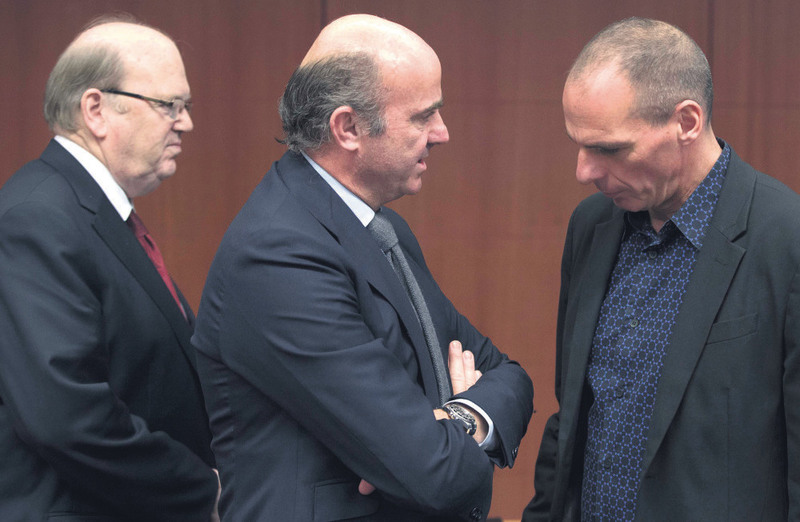 "Little has been done since the last Eurogroup (meeting two weeks ago) in terms of talks, in terms of implementation," Eurogroup chairman Jeroen Dijsselbloem said on arrival for a meeting of ministers of the 19-nation currency bloc on Monday. "We have to stop wasting time and really start talks seriously," he said, adding that eurozone partners stood ready to support Greece if it continued on the economic reform path.

Eurozone officials were not persuaded by a letter sent by outspoken Greek Finance Minister Yanis Varoufakis on Friday outlining seven planned measures. They said it was only a starting point and no basis for releasing frozen bailout money. Varoufakis irritated EU partners in a weekend newspaper interview by dangling the prospect of a referendum.

Dijsselbloem said earlier the steps outlined were "far from complete", adding that it would be very difficult to complete the reform program during the four-month extension of Greece's European Union/International Monetary Fund bailout that runs until end June. Shut out of capital markets and with international loans frozen against a background of falling tax revenues, Greece could run out of cash later this month. Hardline German Finance Minister Wolfgang Schaeuble told reporters Athens must start implementing its obligations and refrain from unilateral changes to its commitments.

Varoufakis, who wants a negotiated restructuring of Greece's debt to official lenders, was quoted by Italy's Corriere della Sera on Sunday as saying the leftist-led government could call a referendum or early elections if European partners rejected its debt and growth plans. The finance ministry later clarified that the Marxist former academic had been replying to a hypothetical question and that any referendum would "obviously regard the content of reforms and fiscal policy" and not whether to stay in the euro.

French Finance Minister Michel Sapin said on leaving Paris for the meeting that while he was not worried about a risk of Greece defaulting, "things are serious". A source at the European Central Bank said the cash position of Greek banks, on a drip-feed of emergency funding, appeared to be stabilising after heavy deposit outflows from December to late February. The ECB would not allow Greece to increase its issuance of short-term treasury bills because it could not allow monetary financing of the government, the source said. A senior politician in German Chancellor Angela Merkel's conservative bloc said Greece would be better off outside the 19-nation eurozone, suggesting that Schaeuble privately agreed. "By leaving the eurozone, as Finance Minister Schaeuble has suggested, the country could make itself competitive again from a currency perspective with a new drachma," former transport minister Peter Ramsauer, a member of the Bavarian Christian Social Union (CSU), wrote in Bild. Merkel and Schaeuble have both said publicly they want to keep Greece in the currency area. But in a sign that German sentiment may be shifting, Ramsauer said a temporary "Grexit" would be a "great opportunity" for the country to boost its economy and administration "making it fit to return to the euro area from a position of strength".

Seeking European support for his government's efforts to alleviate deep hardship caused by austerity, leftist Greek Prime Minister Alexis Tsipras will meet European Commission President Jean-Claude Juncker on Friday. A Greek official said they would discuss how Greece can use EU funds to tackle what he called the humanitarian crisis. Juncker has been trying to mediate between the new Athens government and its EU creditors, notably Germany, but his efforts have irritated Berlin, the eurozone's main paymaster, which is keen to avoid sending mixed messages to Greece. German Deputy Finance Minister Steffen Kampeter said in a radio interview he did not expect substantial decisions on Greece at Monday's Eurogroup meeting because ministers were waiting for more financial details on the reform plans. He criticised Varoufakis' talk of a referendum or returning to elections, saying it would only delay what needed to be done.

An opinion poll on Monday showed a large majority of Greeks want Athens to reach a compromise deal with lenders to avoid having to leave the euro. Some 69.6 percent of Greeks say the new leftist-led government should look for an "honourable compromise" to resolve the crisis, according to a Marc survey for the newspaper Efimerida Ton Syntakton. Only 27.4 percent of those questioned wanted Greece to refuse any compromise, even if that meant having to leave the eurozone. Tsipras won power in January promising to renegotiate the bailout package and end austerity, but was forced to accept a four-month conditional extension to avert bankruptcy.