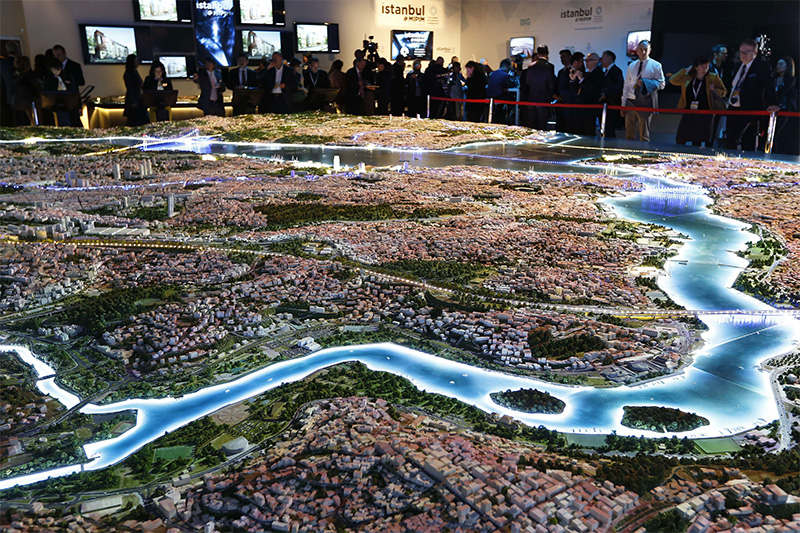 by Daily Sabah Mar 11, 2015 12:00 am
The Istanbul Chamber of Commerce (İTO) has started promoting Istanbul with a 96-square-meter mock-up for MIPIM, which is the world's largest real estate fair that welcomes more than 20,000 visitors and brings together the most important international players of the real estate sector. The mock-up will show the visitors 24 hours of Istanbul with visual and sound effects and is displayed in a 300-square-meter Istanbul tent.

Istanbul is attending the 26th MIPIM fair organized in Cannes, France for the next four days with outstanding projects. The mock-up is the largest model of Istanbul ever and has been developed according to MIPIM's concept for this year - "Digital Revolution."

The Municipality of Beyoğlu has developed 43 projects for the mock-up to promote historical and cultural ruins and locations of Istanbul along with recent mega projects and public investments. Since real estate and urban transformation projects are promoted in an international arena at MIPIM, it is the perfect platform for companies to sign international deals. International investors, urban planners, shopping malls, architects, representatives of the real estate sector, municipalities and hotel changes will again meet at the fair this year.

ITO Chairman İbrahim Çağlar said that this is the first time Istanbul's symbolic historical sites, real estate and infrastructure projects will be promoted with a 3-D mock-up at the Istanbul tent. Remarking that there are around 60,000 real estate and construction companies registered with İTO, Çağlar said this was the first time a real and live mock-up of Istanbul has been developed with this project.

"With movement, light, sound and visual effects enriched with sounds that have become the symbols of Istanbul, our mock-up, which even includes ships sailing on the Bosporus, shows the soul of the city with 24-hour shows. The projects developed for our city, which is a gateway and a meeting point of various cultures, are promoted to global investors that may be interested," Çağlar said.

The mock-up will be brought to Istanbul after the fair and will be developed to include the whole of Istanbul and displayed to the public.

Mega projects are displayed in the Istanbul tent

Third bridge: The TL 4.5 billion ($1.7 billion) project will speed up the international highway transportation and help decrease traffic in Istanbul. The project is to be completed on Oct. 29, 2015.

Third airport: The first phase of the airport, which will have a passenger capacity of 150 million will be completed in October 2017 and other phases in 2018. The investment cost of the project is about $46 billion.

Eurasia Tunnel: The project, which will link Kazlıçeşme in Europe to Göztepe on the Anatolian side by a highway, will cost approximately $1.2 billion and be completed in 2016.

Canal Istanbul: The canal is projected to connect the Marmara Sea to the Black Sea and will serve as a second strait for Istanbul. It will also decrease the current naval traffic on the Bosporus.