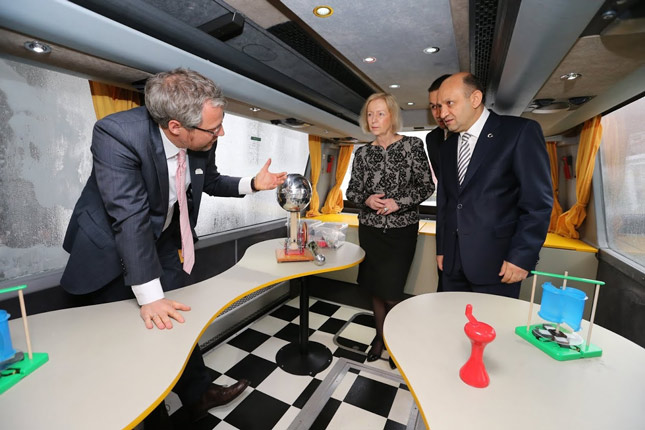 by Anadolu Agency Mar 13, 2015 12:00 am
Turkey's first science attache will be appointed in the coming days to the German capital Berlin, Science, Industry and Technology Minister Fikri Işık, announced yesterday. "With a science attache, Turkish-German science relations will be followed more officially and effectively," Işık said at the closing ceremony of the German-Turkish Year of Science in Ankara.The science attache to Berlin will be the first of six that the government has decided to appoint abroad, the minister said.

The German-Turkish Year of Science is a joint initiative of the German Federal Ministry of Education and Research and the Ministry of Science, Industry and Technology of the Republic of Turkey. During the year of science partnership, Germany and Turkey worked together under the motto "Science Bridging Nations" to pursue several goals. Both partners are committed to bringing attention to the importance and successes of their cooperation and building on existing cooperation in research, education and innovation through forward-looking projects. Işık said the German-Turkish Year of Science contributed greatly to the science and research work of the two countries, as well as strengthening bilateral relations.

Over 200 science activities were held during the German-Turkish Year of Science, and a number of scientists visited Turkey and Germany, according to Işık. One such joint initiative was a Turkish-German University located in Istanbul, which opened its doors in 2013 and provides education in German.

The university aims to establish cooperation between the two countries by enriching both Turkey and Germany's education systems through higher education and academic research. "It would be wrong to describe it as the 'closing of the science year,' " German Minister of Education and Research, Johanna Wanka, said. "I hope it will help improve the relationship between Turkish and German scientists."