Investors commit $10.7B at Egypt conference 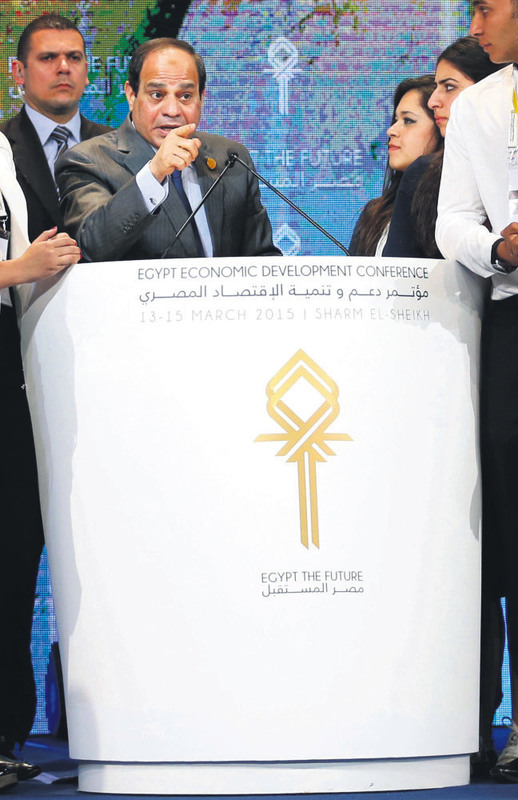 by Compiled from Wire Services Mar 15, 2015 12:00 am
After Gulf Arab nations announced a $12.5 billion aid package, investors committed $10.7 billion to projects in Egypt on the second day of a summit meant to spur the ailing economy, organizers said at an international investment conference in the Red Sea resort of Sharm El-Sheikh on Sunday. The agreements include a $6.5 billion deal with Egypt's Orascom group and the Abu Dhabi-owned International Petroleum Investment Co. to build a coal-fired power plant over four years, they said in a statement. Of Saturday's agreements, Cairo Financial Holding, formerly led by Investment Minister Ashraf Salman, had the second-largest investment at $1 billion into a tourism fund, according to AP. Preliminary engineering and finance agreements amounting to $5.8 billion were also signed, along with a further $5.4 billion in loans and grants from international partners and organizations. The statement did not mention billions of dollars in agreements signed with Germany's Siemens AG or Italy's Eni SpA on Saturday. The Egyptian government has signed a joint declaration of intent with the European Bank for Reconstruction and Development (EBRD), which plans to fund projects in Egypt worth nearly $1 billion through 2016, according to AA. Egypt's Ministry for International Cooperation said in a statement that the EBRD plans to finance new projects in both the public and private sectors with investments ranging from $700 million to $1 billion through 2016. The declaration comes as part of the EBRD's plan to support Egypt's economy at the current stage and make funding available for a host of sectors, the ministry noted.

The ministry added that the EBRD hopes Egypt could benefit from its cumulative expertise in implementing projects in the Middle East and central Europe over the past 20 years. The EBRD, which was established in 1991, opened a permanent bureau in Cairo in 2014 and has so far funded projects in Egypt worth $742 million. on Sunday boisterously marked the final day of a major economic conference that has injected billions of dollars' worth of aid and investment in his country, while still acknowledging the road to recovery will be long and costly.

A clearly happy Egyptian President Abdel-Fattah el-Sissi invited young Egyptian organizers to join him at the podium before he addressed the economic conference. As military chief, he led the July 2013 military coup of democratically elected President Mohammed Morsi. Nearly a year later, he was elected president. El-Sissi said Egypt needed as much as $300 billion in investments to rebuild. "We are behind, and those who are late must either speed walk or run," he said. "Even running will not be enough in our case." Egypt tourism ministry also hopes to generate $20 billion in revenue from tourism by 2020 by attracting 20 million visitors.
Last Update: Mar 15, 2015 10:53 pm
RELATED TOPICS