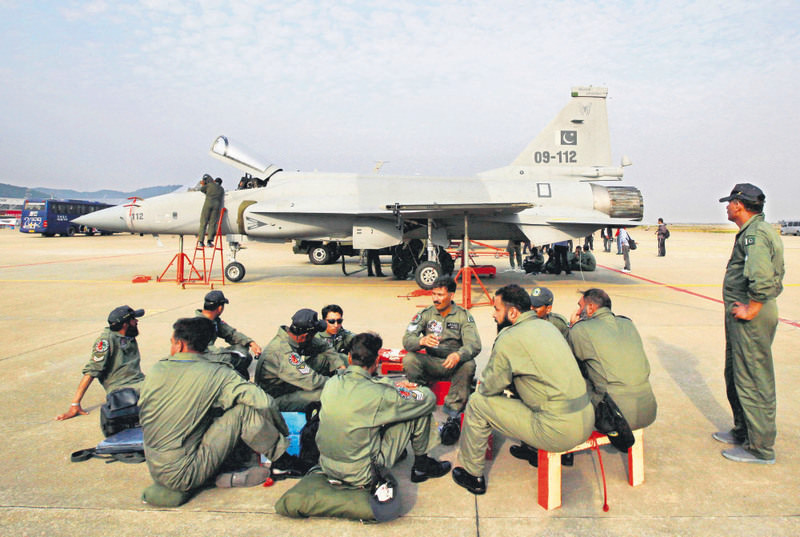 Pakistan air force personnel sit in front of their JF-17 jet fighter at the 8th China International Aviation and Aerospace Exhibition (Zhuhai Airshow) in Zhuhai, on the southern coast of Guangdong province China.
by Mar 16, 2015 12:00 am

China has eased ahead of Germany and France to become the world's number three arms exporter after the U.S. and Russia, according to the Stockholm International Peace Research Institute

The world's second biggest economy, China, has overtaken Germany to become the world's third-biggest arms exporter, although its 5 percent of the market remains small compared to the combined 58 percent of exports from the U.S. and Russia, a new study says.

The volume of the multi-billion dollar world arms trade rose 16 percent during the period 2010 to 2014 over the previous five years, the Stockholm International Peace Research Institute added in its annual report.

The figures show that "the United States has taken a firm lead" with 31 percent of global exports of conventional weapons, SIPRI said, adding that Russia is second with 27 percent. The next three arms exporters are far behind with about 5 percent each, and China is only slightly ahead of fourth-ranked Germany and fifth-ranked France.

Three Asian countries accounted for more than two-thirds of Chinese exports, with Pakistan buying 41 percent of the total, followed by Bangladesh and Myanmar. Beijing also had 18 client nations in Africa during the period.

Russia's top client was India - the world's leading arms importer - with 70 percent of its purchases coming from Russia.

The United States had the most diverse clientele. South Korea, its top client, accounted for only 9 percent of total US business.

Among the top suppliers, China's sales were 143 percent of the figure from the previous five years. Ukraine and Russia also saw surges in exports, while German and French exports declined. Turkey is ranked seventh among the 10 largest importers of major weapons. During 2010-14, 23 percent of arms transfers to the region went to Saudi Arabia, 20 percent to the UAE and 16 percent to Turkey. The USA accounted for 47 percent of total arms supplies to the region, Russia for 12 per cent and the UK for 10 per cent. Several countries in the region are heavily investing in bal

The data reflects the volume of arms deliveries, not the financial value of the deals, SIPRI notes. Among importers, India was far ahead of second- and third-placed Saudi Arabia and China, purchasing some 15 percent of the total volume compared with five percent each for the next two.

African arms imports shot up 45 percent in the period, SIPRI found. "Algeria was the largest arms importer in Africa, followed by Morocco, whose arms imports increased 11-fold," it said. "Cameroon and Nigeria received arms from several states in order to fulfil their urgent demand for weapons to fight against the militant Islamist group Boko Haram," SIPRI added. While the arms trade has been on the rise for the past decade, the volume remains about one-third below its post-war peak reached in the early 1980s.
Last Update: Mar 16, 2015 9:39 pm
RELATED TOPICS