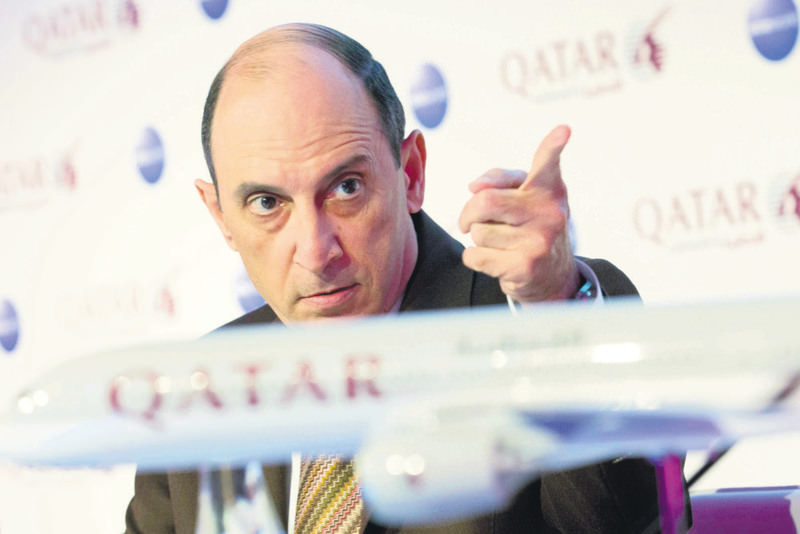 by Compiled from Wire Services Mar 16, 2015 12:00 am
The chief of Qatar Airways yesterday denied his company receives subsidies and accused rivals Delta Air Lines of flying "crap" older planes, escalating hostilities between the Gulf and American carriers, according to AFP. Speaking at an arts conference in Doha, Akbar al-Baker said any money his airline receives from the state is in the form of "legitimate" equity and added his company's fleet of aircraft were much cleaner for the environment in comparison to Delta.

"I think Mr Anderson (CEO of Delta, Richard Anderson) doesn't know the difference between equity and subsidy. We never receive any subsidy," Baker said. He was responding to claims made earlier this month by three U.S. airlines - Delta, American and United - that Qatar, along with carriers in the United Arab Emirates have received $42 billion in unfair subsidies to wrest business away from competitors. Baker also accused Delta of flying "crap airplanes that are 35 years old," when talking about pollution by the aviation industry. In contrast, Baker said Qatar Airways had an "ultra-modern fleet" and was the lowest CO2 contributor in the aviation industry.

Last Friday, France and Germany led a call to ensure EU airlines can fairly compete with those from the Gulf region, which are accused of receiving major state backing, according to AP. The French and German transport ministers said in a statement that they want their EU partners and the EU executive Commission "to adopt a common strategy to bring an end to these practices." The three largest U.S. airlines have claimed that the three Gulf carriers have received more than $40 billion in subsidies from their governments since 2004. They said that makes competition with them unfair because their costs are artificially low. Austria, Belgium, the Netherlands and Sweden backed the Franco-German call at a meeting of EU transport ministers in Brussels Friday, the Franco-German statement said.

France and Germany said that Gulf carriers benefit from "major subventions and public guarantees," and that landing rights in Europe should only be granted to airlines in exchange for fair trade controls on the way companies operate. They also want EU legislation revised so that fair competition can be legally enforced in the air transport sector.

The CEOs of American, United and Delta want U.S. federal officials to renegotiate or kill treaties that have allowed Gulf airlines to increase flights to the U.S. They say that unless the treaties are changed, they will be forced to cut back or drop international routes.