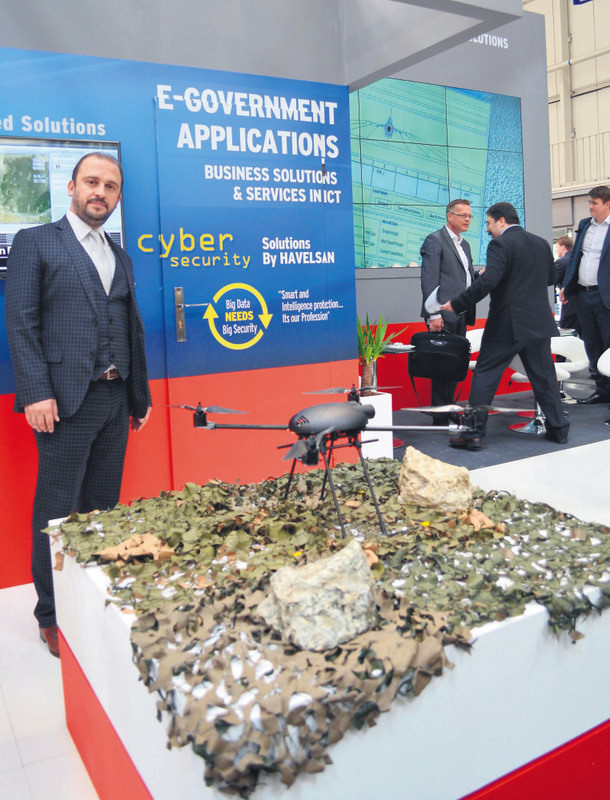 by Anadolu Agency
Mar 20, 2015 12:00 am
HAVELSAN, a defense software and systems company affiliated with the Turkish Armed Forces Foundation, has introduced the Sezgin, a new warning system boasting an integrated unmanned aerial vehicle (UAV) - commonly known as a drone - at the 2015 CeBIT Fair in Germany. HAVELSAN business development manager, Bünyamin Kahraman Karadeniz, said Wednesday that "Sezgin," the Turkish word for insightful, was the result of a joint project with the Turkish Gendarmerie General Command, which aims to protect important establishments, military stations or other facilities from terror attacks. "We are placing different seismic, motion and visual sensors in stone-like artificial objects," Karadeniz said, adding that cameras were sometimes implemented as well. When movement or vibration is detected, the data is transferred immediately to a command center, he explained. "Let's say that someone is moving, but we cannot tell if they are villagers or terrorists. At this point, an unmanned aerial vehicle automatically goes to the place where the signal is coming from and transmits live video footage to the command center," he said, adding it can help security forces take the necessary measures to prevent a potential attack. Karadeniz said that the early warning system will be largely used in an integrated way to especially protect border control points. Moreover, the early warning system's tests have been successful so far in Ankara and Tunceli, according to Karadeniz. Karadeniz stressed that there were also numerous demands for the system coming from outside the country. HAVELSAN, founded in 1982, has been designing and planning critical defense systems, such as the Homeland Security System in Turkey. CeBIT is an international trade fair for information technologies, telecommunications, software and services. It was held in Hannover, Germany, from March 16 to March 19.
Last Update: Mar 20, 2015 1:58 am