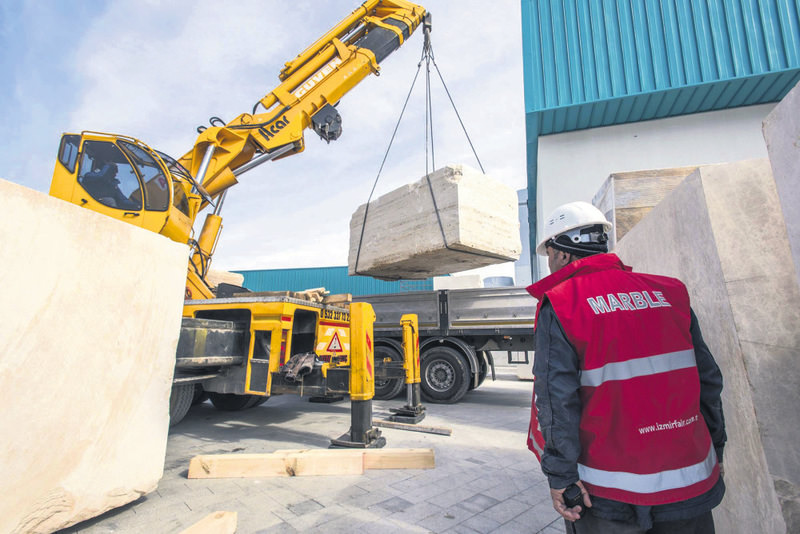 by daily sabah
Mar 24, 2015 12:00 am
Turkey's biggest fair organization, the 21st MARBLE International Natural Stone and Technologies Fair, opens its doors to visitors at Fair Izmir. While 1,298 stands have been installed at the exhibition venues within the facility, 90 trailer trucks bring stone blocks weighing up to 30 tons to the area every day. Officials expect the stone blocks that will be exhibited during the fair will weigh 15,000 tons in total, and the fair will contribute over $150 million to İzmir's economy. The MARBLE fair will be open to visitors from March 25-28. One of the three prominent marble fairs in the world, MARBLE International Natural Stone and Technologies Fair brings customers to many businesses including accommodation, transportation, catering, publishing, automatisation, construction, data processing, security, cleaning, car park, logistics and cargo, besides the revenue which it brings to the natural stone sector. The officials of the fair expect record attendance to the fair and hope to contribute to İzmir financially. Since March 13, the organizers have been transporting and installing stone blocks with 632 trailer trucks. During the fair, 784 processed and semi-processed stone blocks that weigh 10 to 30 tons each, and 15,000 tons in total will be exhibited at exclusively-designed stands. Natural stone from all over the world is brought to İzmir for the 21th MARBLE Fair. Many countries, including Germany, the U.S., Australia, Belgium, the United Arab Emirates, Czech Republic, China, Denmark, Indonesia, France, South Korea, India, British Virgin Islands, the U.K., Iran, Spain, Italy, Mauritius, Egypt, Poland, Romania, Russia, San Marino, Saudi Arabia, Ukraine and Greece will attend the fair.
Last Update: Mar 24, 2015 1:50 am