Local seismic vessel to be launched 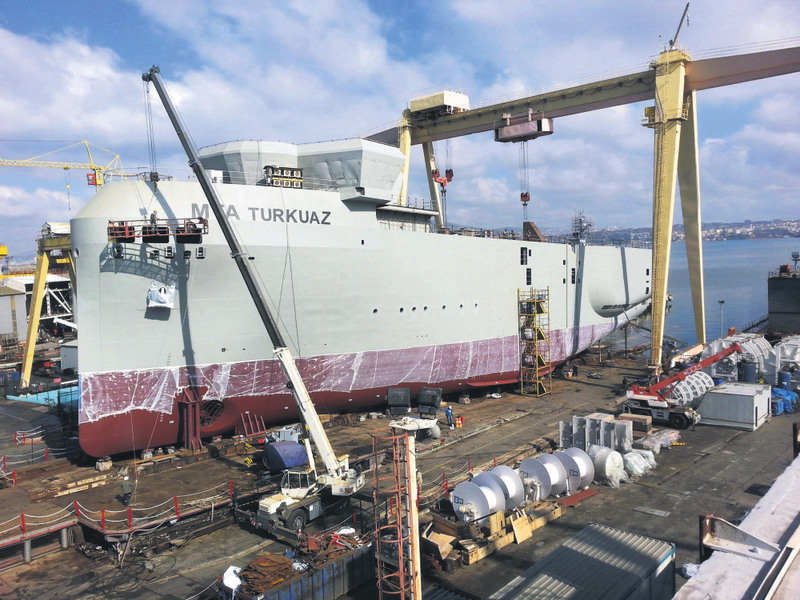 Turkuaz seismic vessel, which was designed and built by Turkish engineers, will start to search for oil and natural gas on behalf of Turkey next week

The Mineral Research and Exploration Institute (MTA) has completed the building of a seismic vessel that can search for oil and natural gas in the poles and oceans. The vessel, which was given the name "Turkuaz Search Vessel," will be put into the sea with a ceremony attended by Prime Minister Ahmet Davutoğlu and Energy and Natural Resources Minister Taner Yıldız next week. Turkuaz, together with the Barbaros vessel, will be used to search for oil and natural gas on behalf of Turkey. It was stated that Turkuaz is not only a seismic vessel, but also has up-to-date geological, geophysical, hydrographic equipment and remote control robot systems. Thus, Turkuaz can collect data from the seas, evaluate them in laboratories and analyze the samples collected from the sea bed. It also has a heliport that reaches international standards.

Besides the continental shelf of Turkey, Turkuaz has the capacity to search for oil on the poles, oceans and hotly disputed regions like the Black Sea, Aegean Sea and Eastern Mediterranean. It also has the capacity to draw earthquake maps of Turkey, research climate change, sea pollution and life at the bottom of the sea. Turkuaz can also be used by public institutions. The Barbaros vessel, the other investment by Turkey in this field, is owned by the Turkish Petroleum Corporation, while Turkuaz is owned by the MTA.

Turkuaz's scientific equipment and systems, which can monitor and mapp up to 15,000 meters below the sea bed, have been supplied by ASELSAN. ASELSAN will also provide integrated logistical support and lifelong maintenance service for the systems. Thus, Turkuaz is an ambitious product with its systems and supports.The Ministry of National Defense also supports Turkuaz. Turkey's National Sea Search Strategy Action Plan was released in 2014. As part of this plan, a study is being carried out by the MTA in cooperation with TÜBİTAK to establish Turkey's Sea Search Center. The MTA signed a memorandum of understanding with the French Research Institute for Exploitation of the Sea (IFREMER), which has a strong scientific and technical infrastructure. Besides IFREMER, the MTA is cooperating with other sea search centers including ISMAR from Italy, NOC from the U.K. and NIOZ from the Netherlands.

Because it is difficult to find employees who can work on seismic vessels like Turkuaz, employees are sent on courses like "Education for Ship's Crew and Technical Staff" at home and abroad. Employees who are going to conduct research at sea will be encouraged to complete their graduate and doctorate education.
Last Update: Mar 25, 2015 11:05 am
RELATED TOPICS