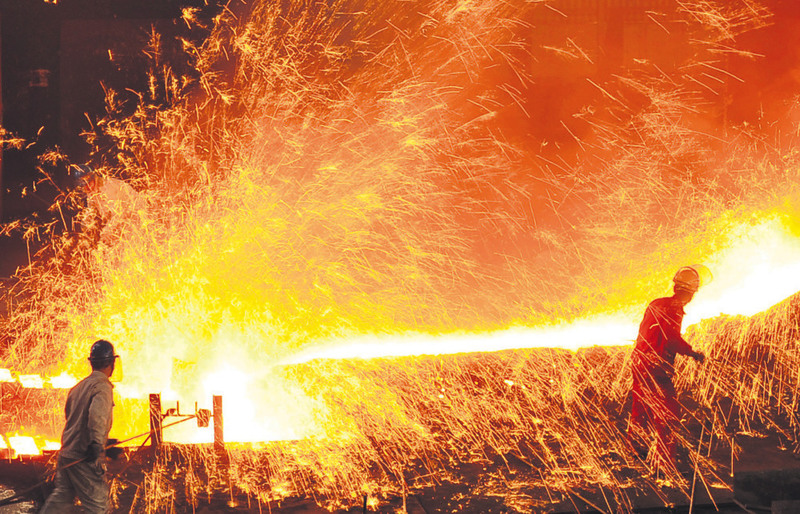 The EU imposed anti-dumping duties on imports of cold-rolled stainless steel sheet from China and Taiwan, which totaled 5.5 billion euros last year in the EU market, according to a notice in the EU's Official Journal

The European Union has imposed tariffs as high as 25.2 percent on stainless steel from China and Taiwan to curb competition for EU producers such as Acerinox SA and Outokumpu Oyj. Steel shares in Europe rose after the announcement. The duties punish Chinese and Taiwanese exporters of cold-rolled flat products for allegedly selling them in the EU's 5.5 billion-euro market below cost, a practice known as dumping. This kind of steel is used in everything from elevators and tanks to boilers and kitchen equipment.

EU producers, which also include Acciai Speciali Terni SpA and Aperam, suffered "material injury" as a result of dumped imports from China and Taiwan, the European Commission (EC), the 28-nation EU's trade authority headquartered in Brussels, said on Wednesday in the Official Journal. The levies, which take effect on Thursday, are for six months and may be prolonged for five years. The case may revive EU-China trade tensions over steel seven years after European producers complained that Chinese competitors had dumped a range of goods in Europe, prompting a series of dumping inquiries. One of those probes covered stainless steel cold-rolled flat products, and was closed in 2009 without the imposition of EU anti-dumping duties. Chinese and Taiwanese exporters, including Shanxi Taigang Stainless Steel Co. and Tang Eng Iron Works Co., increased their combined share of the EU market for stainless steel cold-rolled flat products to 9.5 percent in 2013 from 5.8 percent in 2010, according to the commission. Additionally, China's share grew to 4.3 percent from 1.8 percent over the period, the commission said.

The anti-dumping duties against China range from 24.3 percent to 25.2 percent, depending on the company. The levies against Taiwan range from 10.9 percent to 12 percent. Shares of Outokumpu rose as much as 7 percent in Helsinki on Wednesday after the EC published its decision. Aperam gained as much as 8.6 percent in Amsterdam and Acerinox climbed up to 5.2 percent in Madrid. The trade protection is the preliminary outcome of a dumping probe opened last June by the commission, which has six months to decide whether to turn the provisional duties into "definitive" five-year measures.

The inquiry stems from a May 2014 dumping complaint by European steel industry group Eurofer on behalf of producers that account for more than a quarter of the EU's output of stainless steel cold-rolled flat products. Eurofer hailed the introduction of the anti-dumping duties, saying they are a necessary response to an EU import surge that is linked to overcapacity and that prevented the European industry from becoming profitable. "The root of the problem resides in the huge capacities that have been built in China," the Brussels-based organization said in an emailed statement. "Taiwan has also a structural overcapacity problem."

The EU market for this kind of steel totaled about 5.5 billion euros last year, unchanged from 2013, according to Eurofer. In a parallel case, the EU is threatening to impose a separate set of duties on stainless steel cold-rolled flat products from China to counter alleged subsidies to Chinese manufacturers. The commission opened an inquiry in mid-August into possible trade-distorting Chinese government aid. It has until May 14 to introduce provisional anti-subsidy levies and until Sept. 14 to apply definitive anti-subsidy - or "countervailing" measures.
Last Update: Mar 27, 2015 6:46 pm
RELATED TOPICS