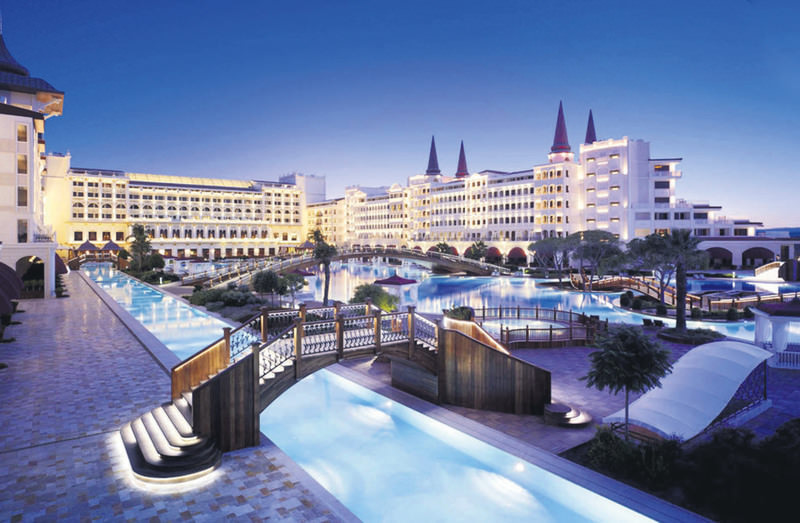 by Compiled from Wire Services Mar 29, 2015 12:00 am
One of the most expensive hotels in Antalya, the Mardan Palace, which was built by Russian businessman Telman Ismailov in 2009, has been put up for sale by the Antalya 4th Directorate of Bailiff and Execution. The execution started as a result of the hotel's debts to Halkbank.

Authorized officers of the hotel announced that the process would not affect customers. TL 650 million ($249 million) has been determined as the estimated price of the hotel, which is located on the Kundu tourist site in Antalya's Aksu district. The first and second tenders for the sale will be held on June 3 and June 30, respectively. It will be possible to place bids electronically during the tender, which will be held through an auction. The 93,000-square-meter hotel facility has 365 standard twin rooms, 146 twin suites, 43 four-bed suits, six twin rooms for the disabled, five four-bed suite villas and 12-bed apartment rooms. The facility also has a 900-person world-class restaurant, 10 a la carte restaurants, a 500-person nightclub, 500-person multi-purpose hall, 830-person conference hall, 16 meeting rooms, movie houses, bowling alleys, mini clubs, swimming pools, fitness centers, offices, indoor and outdoor car parks and a spa unit.

The architectural structure of the hotel, which cost around $800 to $850 million is designed in the style of Dolmabahçe Palace and Kuleli Military High School, and is like a miniature of Istanbul.
Last Update: Mar 29, 2015 8:46 pm
RELATED TOPICS