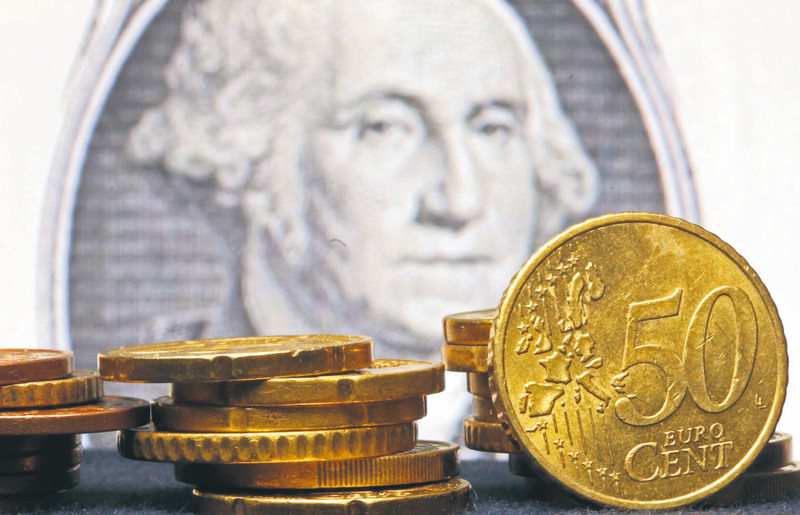 by French Press Agency - AFP Apr 06, 2015 12:00 am
The euro's slide against the dollar has reignited talk of a "currency war," with analysts in opposing camps over whether or not countries are consciously playing with their exchange rates. War language is no stranger to modern monetary policy. The massive bond buying programs, or quantitative easing (QE), that central banks have used in response to the financial and economic crises that have rocked the global economy since 2008 are often referred to as a "bazooka." After lowering interest rates, sometimes to zero or even into negative territory, major central banks turned to buying government and corporate bonds to stimulate the economy. But central banks fired this bazooka because governments had few options for what they could do. "We are really in a situation where monetary policy has been substituted for budgetary policy [as] the governments don't have any more budgetary margin for maneuver," said Saxo Banque economist Christopher Dembik.

And the bazooka wasn't directly aimed at exchange rates. Bond purchases inject money into the economy, thus addressing any concerns about market liquidity. To an extent, the funds result in new investments in the real economy as well since it stimulates growth, another aim of QE policies. But some funds end up leaving the country as investors seek better returns elsewhere. This pushes the value of a currency down, which is also not an unwelcome effect for policymakers as this favors more exports of goods and services and therefore growth. "The currency weapon is rarely the official objective," said Patrick Jacq, a bonds specialist at BNP Paribas bank.

Led by Brazil, developing countries charged that the U.S. QE program was a first shot in a currency war because their economies suffered as exports slumped thanks to the weak dollar. Those complaints were brushed aside with commitments by the leading economies to "market-determined exchange rates."

Lowering a currency's value may not be the stated policy objective, "but they are thinking it so loudly that the entire world hears it," said Rene Desfossez, a bonds specialist at Natixis investment bank. A weak currency can provide a boost to exports, which contributes to a wider economic recoverY. And UniCredit's global chief economist Erik Nielsen recently observed that the days of "gentlemanly" cooperation between central banks is long gone. "I am not in the 'currency war' camp, but it is important to note that the world's leading central bankers are now making it explicitly clear that they run monetary policy for their own country only," he said in a note to clients. More countries have been joining the easing bandwagon, either on their own initiative or in response to others. The Organisation for Economic Cooperation and Development recently noted that monetary policy in countries accounting for roughly half of global output had been eased in the past few months.
Last Update: Apr 06, 2015 2:17 am
RELATED TOPICS