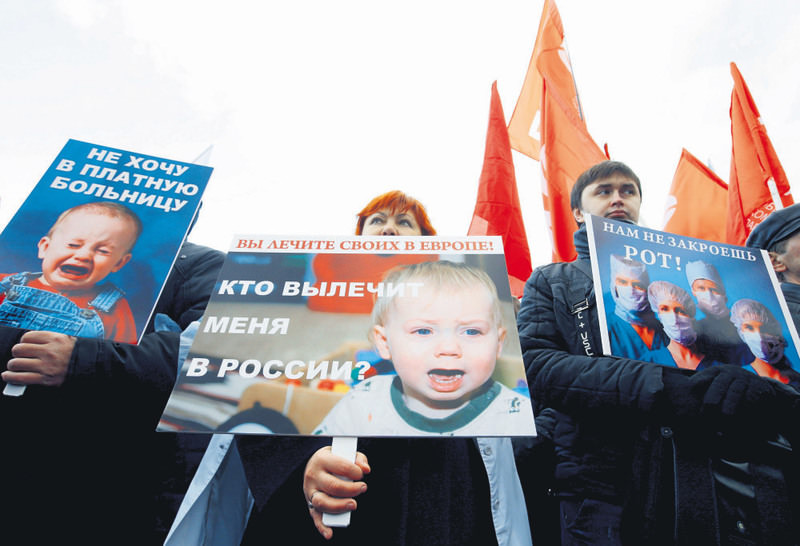 by reuters
Apr 12, 2015 12:00 am
It was when her nine-year-old son said he wanted to be ill to keep her home that Ekaterina Chatskaya knew the cuts at her Moscow clinic had gone too far and she was working too many hours. The 33-year-old Russian gynaecologist said her work burden became unbearable when management announced new job losses in November. Unable to cope, she and dozens of other doctors in Moscow started a "work-to-rule" action - refusing to work beyond their official contract hours - to try to protect a health service they say is being driven to ruin.

Their action is a rare display of discontent in Russia, where resurgent patriotism over the annexation of Crimea last year has largely eclipsed frustration over job cuts, rising prices and lower wages in an economic crisis deepened by Western sanctions over Moscow's role in Ukraine and a weak oil price.

But despite feeling the squeeze more than most, Russia's nascent middle class is reluctant to blame President Vladimir Putin and his policies, scared of what they see as their individual battles against the system becoming "political".

"It was simply because of the increasing burden. At first it was more or less tolerable, then it snowballed," Chatskaya said, listing the rise in responsibilities and patients, and cuts in jobs, at her clinic on the outskirts of Moscow that accelerated over the last six months as the government cut spending.

When her own health suffered - she was diagnosed with high blood pressure due to stress - and her son clung to her one morning after not seeing her for days, Chatskaya did something out of character: she got in touch with a union and agreed to work to rule.

But sitting over a cup of tea in one of Moscow's identikit suburbs of row upon row of grey apartment blocks, Chatskaya is reluctant to be drawn on whether the economic crisis threatens the gains made by the people who became Russia's middle class after the Soviet Union collapsed in 1991. Her wage, which averaged 40,000-47,000 roubles ($790-930 at the current rate) a month last year, is stretched by a food bill that has almost doubled to 10,000 roubles every one or two weeks. Still she sees herself as "far removed from politics".

It is a stance many of Russia's teachers, doctors, business owners and IT experts share - leave politics to the politicians, or as doctor Maria Gubareva, who is also participating in the work-to-rule action, puts it: "What should the government do? That's a question for government leaders."

For Vladimir Petukhov, head of the centre for social research at the Russian Academy of the Sciences, it means that any protests are easily extinguished, making any repeat of mass demonstrations in 2011-2012 that shook Putin unlikely.

"Those who thought the middle class would be the driver of change ... have been disappointed," he said. "But now it is more dangerous because the crisis is hitting people in their pockets."

A decline in real wages, a weak rouble and high interest rates have hurt middle-class people more than most, striking at their ability to travel abroad, invest in housing and in their health and children's education.

Anna, the head of a computer systems company, said that out of 600 projects she was involved in at the beginning of the year, only 250 are left.

Natalia, whose husband oversaw the conversion of a Moscow garage into a commercial space, said there were few takers in a market where office vacancy rates have reached 17.5 percent from 12 percent a year ago. "The market is bad now. Have you seen how many office buildings and shops are for rent or sale?" Natalia asked. Neither Anna nor Natalia wanted to give her full name, a sign of concern that they could face retribution if they speak out.

Around 15 percent of Russia's population are firmly middle class, while around another 25 percent are on the periphery, said Svetlana Mareyeva, senior research fellow at the Russian Academy of Sciences. They are the ones who will have seen their lifestyles most jeopardised by the economic crisis.

Their ability to pay for services like education and healthcare is dropping at the same time as those services are being hit by public spending cuts - moves which have already prompted isolated protests. About 60 teachers went on strike in a Siberian region last month over salary delays, according to local media, and about 20 ambulance workers are on hunger strike in Ufa, capital of the southern Bashkortostan region, over poor equipment and wages. Still, such action is still rare.

One of the work-to-rule doctors, Gubareva, said that while she feels support from colleagues, few have so far joined the action "for various reasons, the main one being they are scared of losing their jobs, harassment and threats".

But for Chatskaya, the gynaecologist, the small successes she has so far wrung from a system she had never questioned before have made her more optimistic about her own future at least.