Alternative funding is what the world needs for growth 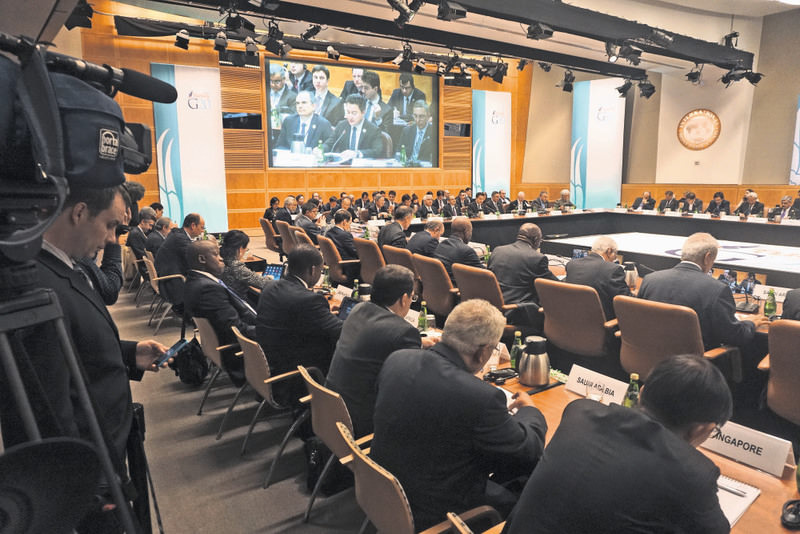 Deputy PM Babacan deliveres a speech at the annual spring meetings of the IMF and World Bank Group in Washington.
by Anadolu Agency Apr 17, 2015 12:00 am

G20 members and the world's major economies focus on growth in direct discussions on the funding of SMEs in Washington meetings. With less uncertainty and lower risks, Islamic financial instruments headline the agenda

As the chair of the G20 group, Turkey is promoting Islamic finance because it offers additional financial instruments with less uncertainty and shared risks, according to the country's deputy prime minister in charge of the economy, Ali Babacan. Babacan's comments were made during a panel discussion at the annual spring meetings of the International Monetary Fund (IMF) and the World Bank in Washington, D.C., on Thursday.

As Islamic banking instruments become more popular all over the world, G20 finance authorities discuss its integration into local economies, while the IMF is organizing three seminars this year to introduce its methods. "As the G20 chair, we are highlighting the merits of Islamic finance in the first ministerial communique, which we issued in February during our Istanbul meetings," Babacan said, referring to the way corporations and banking institutions in the Muslim world raise capital in accordance with Sharia (Islamic) law.

After assuming leadership of the G20 last December, the bloc endorsed for the first time, asset-based financing and Islamic financial instruments such as sukuk - commonly referred to as the Islamic equivalent of bonds. Because fixed-income, interest-bearing bonds are not permitted under Islamic law, sukuk securities are structured to comply with Islam's religious tenets and investment principles, which prohibit charging or paying interest. Islamic finance is "safer," according to Babacan, who cited the 2000 and 2009 financial crises that he said "proved once again that the risks are managed better under the Islamic financial schemes." "Also for regulation purposes, macro credential purposes, it is considered as a less risky kind of financing means," he added. The more countries develop stronger legal frameworks to support Islamic finance, the more attention the system will get, as issuers and investors who are sensitive to Islamic rules participate in the structure.

Central to Islamic banking and finance is an understanding of the importance of risk sharing as part of raising capital and the avoidance of "interest" or "usury," he said.

"It is important to look at this inclusiveness point of view because in many Muslim countries, there are mass populations, wide segments of the society who are very sensitive about the Islamic rules. Yet, they are somehow outside of the system just because of the lack of options-Islamic compliant instruments," he added. Babacan, along with roughly 13,000 others, is in Washington for the annual IMF and World Bank spring meetings.

Approximately the same amount of delegates, including a number of world leaders, is expected to attend the 10th annual G20 Leaders' Summit in Turkey in November, according to Turkish officials. Turkey currently heads the G20 group of wealthy and emerging nations.
Last Update: Apr 17, 2015 9:59 pm
RELATED TOPICS