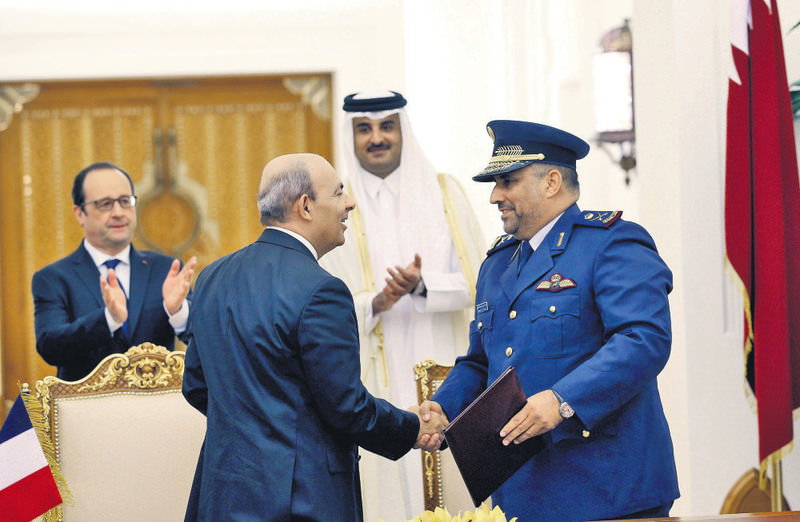 While the French president and Qatari emir signed a $7 billion agreement for the sale of 24 Rafale fighter jets, Hollande will today become the first Western head of state to attend a summit of the Gulf Cooperation Council

Qatar signed a multi-billion-euro deal with French defence group Dassault yesterday to buy 24 Rafale fighter jets, in a ceremony attended by the leaders of both countries in Doha. French President François Hollande sought to boost ties in the Gulf as he oversaw the signing of a warplanes deal with Qatar and headed to Saudi Arabia for a summit. Hollande was to be the first Western head of state to attend a summit of the Gulf Cooperation Council (GCC) during the meeting in Riyadh today.

The summit comes at a crucial time for the six-nation GCC, with a Saudi-led coalition bombing rebels in Yemen, concern over the rise of Islamist militants and regional worries over a potential final nuclear deal with Iran. With Hollande in attendance, the CEO of French aerospace firm Dassault, Eric Trappier, signed the 6.3-billion-euro ($7-billion) deal with Qatari defence officials in Doha. The agreement includes an order for 24 Rafale fighter jets, with an option on a further 12. Having struggled for years to sell any Rafales abroad, Dassault has recently scored several lucrative high-profile contracts with Egypt, India, and now Qatar.

According to Reuters, the contract - the third this year for Dassault after deals to sell Rafale jets to Egypt and India - also includes MBDA missiles, and the training of 36 Qatari pilots and 100 technicians by the French military. Officials said the accord also provided for the training of a number of Qatari intelligence officers.

"It's a good choice," said Hollande, who had talks with Sheikh Tamim. Dassault is in talks aimed at supplying 16 of the multi-role combat jets to Malaysia and has resumed discussions over potential fighter sales to another Gulf Arab state, the United Arab Emirates (UAE). Dassault chief executive Eric Trappier told reporters Kuwait was also evaluating the plane. The Qatar sale was "a good sign for all the countries of the region" because now they would see the capabilities of the aircraft, he said. "It's a little bit the snowball effect - except it's in the desert," he said.
Last Update: May 04, 2015 11:08 pm
RELATED TOPICS