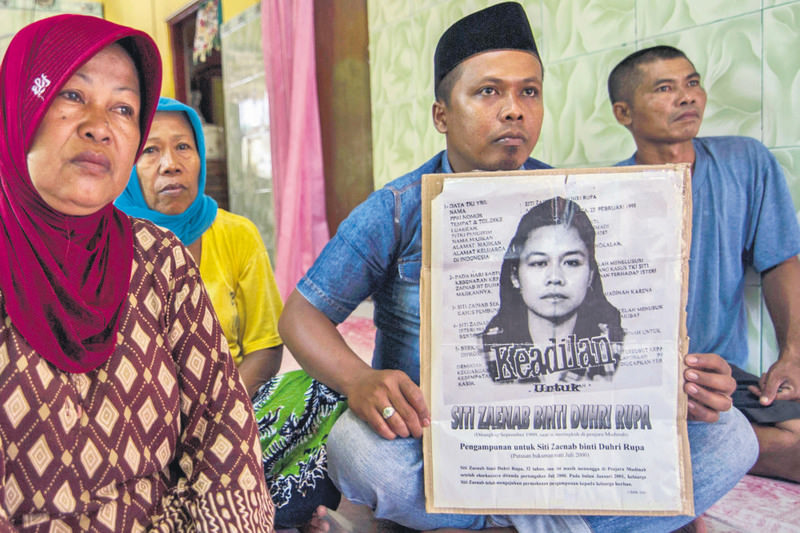 Family members of beheaded Indonesian maid Siti Zainab display a poster bearing her portrait at their family home in Bangkalan in East Java province. Saudi authorities said Siti Zainab was executed on April 14 in the Muslim holy city of Medina after being convicted of stabbing and beating Saudi woman Noura al-Morobei to death in 1999

The ban affects countries including Saudi Arabia - a major destination for Indonesian maids - United Arab Emirates, Qatar, Bahrain and Egypt, and will come into effect in three months' time, Manpower Minister Hanif Dhakiri was cited as saying in local media. Jakarta, which has long complained about the treatment of Indonesian maids in the Middle East, had already placed a moratorium on sending new helpers to Saudi Arabia in 2011 following the beheading of a worker. The new move is meant to be permanent. Maids already working in the affected countries will be allowed to stay and continue in their positions. Indonesia's anger at the executions of its citizens abroad comes despite the fact that Jakarta last week executed seven foreign drug convicts, drawing a storm of international protest. "According to the law, the government has the right to stop the placement of migrant workers in particular countries if it is believed that their employment degrades human values and the dignity of the nation," Dhakiri was quoted as saying by state-run news agency Antara. He said there were "many problems" with Indonesians working abroad related to "labour norms and human rights violations".

Dhakiri cited the execution of Indonesian domestic workers Siti Zainab and Karni binti Medi Tarsim, who were both put to death for murder just days apart in April. The foreign ministry summoned the Saudi ambassador to Indonesia after both executions, complaining Jakarta had not been informed beforehand. Drug trafficking, rape, murder, apostasy and armed robbery are all punishable by death under the kingdom's strict version of Islamic sharia law. Dhakiri also said Indonesia will tighten placement of helpers to countries in the Asia-Pacific.
Last Update: May 05, 2015 8:01 pm
RELATED TOPICS