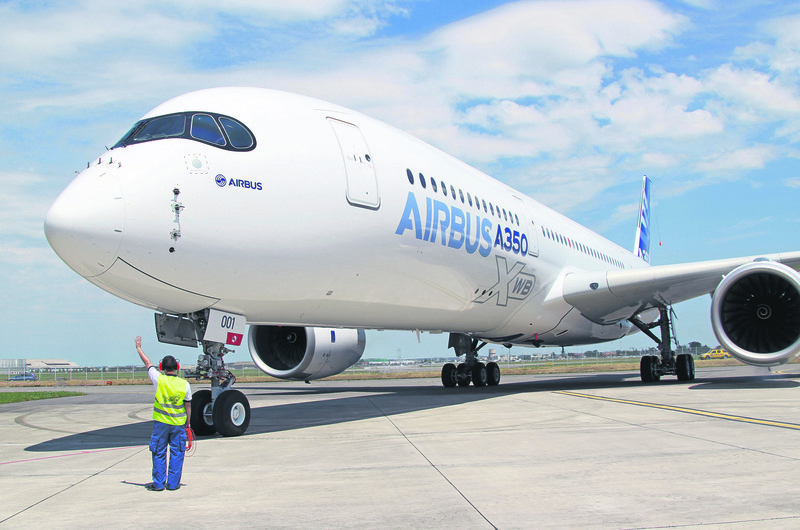 by May 06, 2015 12:00 am
Emirates Airlines is considering the purchase of up to 70 twin-engine Airbus A350s or Boeing 787s, company president Tim Clark said in Berlin Thursday, which would bolster the carrier's long-haul fleet. Clark remained vague on the number and maker of twin-engine wide-body planes, but said the acquisition was part of Emirates's efforts to increase its share of the traffic on the world's long-haul routes. "Possibly it will be 50 to 70, but we still have to decide," Clark said during a visit to Berlin's ITB tourism convention, adding many details on the planned purchase will depend on development of Emirates' principal Dubai International Airport hub. The announcement represented more potential good news for Airbus, following Clark's earlier comments that Emirates may buy 100 to 200 A380s - the super-jumbo that Airbus received no orders for in 2014. If that order materialises, it would not only go a long way to alleviate doubts over the future of the A380 program, but also help Airbus partially recoup business lost last June when Emirates cancelled its 2007 order of 70 A350s valued at $16.5 billion.

Clark said the combination of increasing air travel and plummeting oil prices means "the industry has a huge opportunity to put itself back on to a profit basis, generating cash and able to expand and to reinvest" in new, more efficient aircraft.

But his moves to do so may provoke additional objections from rival airlines in Europe and the United States, which allege that Emirates and Gulf peers Qatar Airlines and Etihad Airways receive unfair financing from their energy-rich, deep-pocketed state owners to capture expanding stakes of long-haul markets.

Clark objected to those complaints, saying Emirates is flying on competitiveness it has had to develop relying on capital vested in it at its founding. "What we were given (then) was this: a clean sheet of paper and a $10 million check. We built this through blood, sweat and tears - we had enormous difficulties," Clark said. He added he'd be travelling to Washington soon to meet with officials regarding a private report Delta Air Lines, United and American Airlines delivered to U.S. officials that claims to detail unfair subsidies the Gulf carriers receive to enhance their competitive edge. "It's up to the Americans to revisit their international oversee strategy and perhaps to look at what we are doing," he commented, saying he will "talk to some of the senior players in the (U.S.) government, then to establish how this is being dealt with. "After that, we will formalise our response." Emirates, which is currently looking for increased access in Germany and France, says it has generated 1,400 direct or indirect jobs in Germany, Italy, and Britain, and generates 6.6 billion euros of economic activity in the EU.
Last Update: May 06, 2015 10:04 pm
RELATED TOPICS