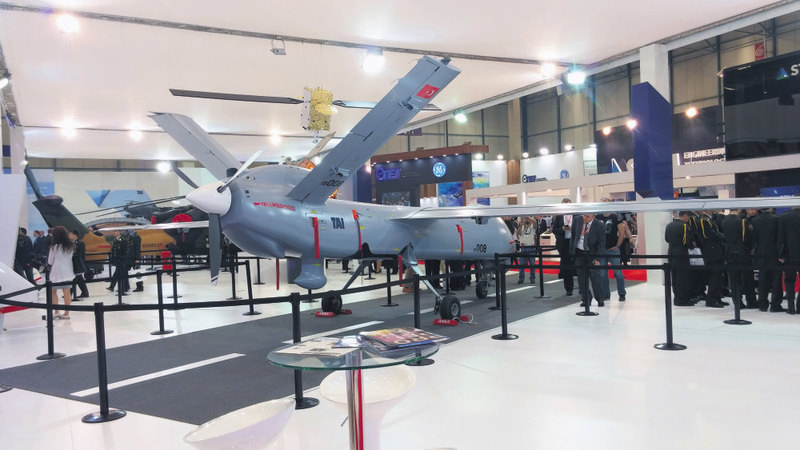 Held by the Ministry of National Defense and Turkish Armed Forces Foundation (TAFF), 404 companies from 32 countries, along with many high-ranking delegations from all around the world, are taking part in IDEF '15, which will last until May 8 in the TÜYAP Istanbul Exhibition Center.

Since 1993, when it was first held, the IDEF has developed into one of the largest defense fairs in the world and a show-off venue for Turkey's booming defense industry. The Altay, a Turkish tank that is projected to replace the Turkish Armed Forces' main battle tank inventory, or the T-129 ATAK, and the attack helicopter developed by Turkish Aerospace Industries (TAI) and AgustaWestland, are among the masterpieces of the fair.

The products exhibited at IDEF '15 range from Swiss army knives to tanks, and small machinery parts to helicopters. Since IDEF '15 is a defense fair, one can see young cadets examine the latest models of an automatic rifle, while the Air Force Commander is being briefed regarding the latest air defense systems. Delegations from all around the world, both civilians as well as military personnel, have flocked to IDEF '15 to view the latest defense technologies. Meanwhile trade is still at the top of everyone's agenda.

Besides the Turkish Armed Forces and its affiliated defense companies like Aselsan, Havelsan, Roketsan and TAI, many other private Turkish firms and companies from all around the world are present at IDEF '15. The U.S., the U.K., Germany and China have the largest country in the fair, both in terms of visibility and in terms of companies. South Africa surprisingly has a very large and catchy stand for its companies, and even Canada, dubbed a pacifist country, is represented with a very large stand.

Ali Baran, director of the French electronics firm Thales's Turkish branch, said that the IDEF had managed to become an international fair that attracts a high level of participation. Baran emphasized Turkey not only aims to remove defense dependency on foreign countries in terms of production, but also on various other areas such as intelligence. He noted that the country's first reconnaissance satellite, Göktürk-1, was set to be delivered to the Turkish government yesterday, a joint venture project by Thales and Italian Finmeccanica. Baran said that Thales Turkey currently employs 165 people in their Turkey office with an annual sales of 30 million euros, and they aim to increase these numbers due to increased defense spending in Eurasia and the Middle East while defense budgets are stagnating in Europe.

The fair is especially crucial for small and medium enterprises (SME's) and their highly specialized products to get in touch with official delegations and defense giants. Guiseppe Oliva from the Italian Trade Agency said that small defense companies urged the government to participate in IDEF '15 as a joint delegation, and so far they have received positive feedback and additional deals. Bünyamin Ekmen, partner of Turkish machinery firm Gürmaksan, said that IDEF '15 helped them to receive important orders from Russia and South Korea. Ekmen also pointed out the role of Turkish SME's in increasing the nationalization ratio in defense projects.

IDEF '15 is also important for Turkish government agencies to increase their cooperation with foreign countries and make new deals. Ahmet Kaygusuz, Central Asia and Far East Department Chief of Turkey's Undersecretariat of Defense Industries (SSM), pointed out their strategy to expand into Central Asian and Asia-Pacific markets. Kaygusuz said that they aim to increase regional and bilateral cooperation through new contracts, which are not only formulated as arms sales, but also include technology transfer and creating employment. A program agreement has recently been signed at IDEF '15 between Indonesia and a consortium involving SSM to develop a medium-sized tank for the archepelago nation, Kaygusuz said, adding that two prototypes will initially be built, one in Indonesia and one in Turkey.

Turkey currently has around $1.675 billion-worth of defense exports, varying from military clothing to sophisticated engineering projects. However, the ratio of engineering and design, which are highly lucrative compared to arms manufacturing, are still lower than expectations. Mustafa Odabaş, Export Manager of Defense Technologies and Engineering (STM), a joint venture of TSK and SSM, said that IDEF '15 represents the current level of Turkish defense industries, which were founded as late as 1974 and currently admired by the countries in the region. STM currently undertakes the export of Turkey's national ship project, dubbed as MİLGEM, along with various other engineering projects like electronic flightpacks for pilots or vertical wind tunnels. Odabaş stated that Turkish companies are highly competent in land vehicles, while planes, helicopters or ships are also being built in Turkey. He also said that the lack of engine production in Turkey was one of the final steps toward reaching a fully independent defense industry, but he also stressed the need for large investment as well as worldwide marketing abilities.