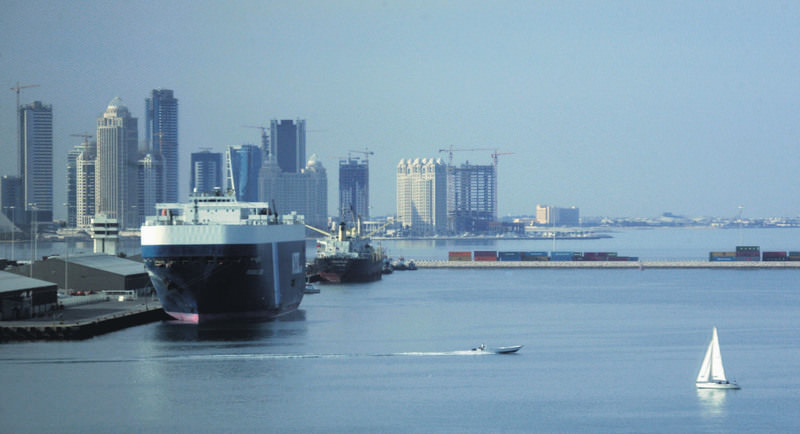 by Anadolu Agency May 07, 2015 12:00 am
Kenya and Qatar on Friday signed a major agreement to step up bilateral maritime cooperation, the Kenyan presidency announced. According to a statement from the presidency, the signing of the agreement had followed a meeting between Kenyan President Uhuru Kenyatta and Qatari Transport Minister Jassim Saif Al Sulaiti. "Under the maritime deal, there will be direct shipping between [Kenya's Indian Ocean port of] Mombasa and Doha, which is set to boost trade in Kenya and the East Africa region," the presidency declared. The agreement, it added, would also pave the way towards giving Kenyan seafarers priority in terms of employment opportunities in Qatari shipping lines.

Qatari Airways, the presidential statement read, would soon begin operating cargo flights from Kenya's Jomo Kenyatta International Airport as well. It said a team from Qatar was expected to visit Nairobi to hammer out details of a deal by which cargo will be transported from the Kenyan capital to Doha for further transport. However, the presidential statement did not mention when the Qatari team would arrive in Kenya. Al Sulaiti, for his part, told the Kenyan president that his country would train three Kenyan engineers at the Doha Port Authority, where they would be subject to "rigoroU.S." training in port construction and upgrading, according to the statement. The transport minister also said Qatar planned to employ more Kenyans in its aviation and transport sectors. Kenyan exports to Qatar in 2011 amounted to $580,000, while imports from Qatar amounted to $11 million, according to Kenya's Trade Ministry.

Kenyan exports to Qatar include unprocessed agricultural foods, while imports include chemicals, fertilizers, plastics and furniture. The signing of the agreement in Nairobi comes nearly five months after Kenyatta paid a three-day state visit to Qatar, where he signed four agreements.

One of the agreements laid the foundations for stepped-up bilateral cooperation in the fields of trade, indU.S.try, energy, communications, transport, construction, labor, tourism and agriculture. Doha and Nairobi also agreed to step up cooperation as Kenya moves to implement its "Vision 2030" development blueprint, which aims to make the East African nation an indU.S.trialized, middle-income country. One of Kenya's major projects, which Qatar has agreed to assist in, is the Lamu Port-Sudan-Ethiopia Transport Corridor known as LAPSSET.

The project, expected to be completed by 2020, is comprised of 1,700 kilometers of superhighway and 1,600 kilometers of modern railway linking Lamu - an archipelago comprised of numeroU.S. islets - with landlocked Ethiopia and South Sudan. The railway will later make its way across the continent to Douala in Cameroon, opening up an alternative route for trans-Atlantic trade and business between Africa and the Americas.
Last Update: May 07, 2015 11:09 pm
RELATED TOPICS