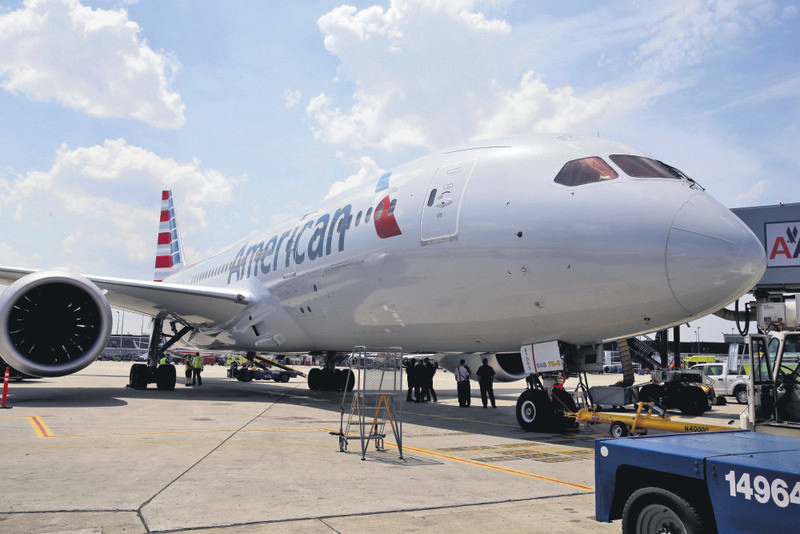 American Airlines' first Boeing 787 Dreamliner prepares to depart Chicago's O'Hare International Airport. American joins United as the only U.S. airline using the plane, which the airline hopes will appeal to passengers.
by Associated Press May 08, 2015 12:00 am

After years of delays, the world's biggest airline is finally using one of the newest passenger jets. By August, American Airlines will be flying 787s from the U.S. to Beijing, Buenos Aires, Shanghai and Tokyo

American Airlines began flying the Boeing 787 between Dallas and Chicago a warm-up for the jet's real role on long international flights. By August, American will be flying 787s from the U.S. to Beijing, Buenos Aires, Shanghai and Tokyo. More routes are in the works, company officials say. The plane, which Boeing calls the Dreamliner, is starting to live up to its promise of giving more travelers the chance to fly nonstop to distant places. Among the new Dreamliner routes: Austin, Texas, to London on British Airways, Boston to Tokyo on Japan Airlines, Denver to Tokyo on United Airlines, San Francisco to Chengdu, China, also on United. Before, those trips likely would have required a connecting flight. And since the Dreamliner has fewer seats than jumbo jets, airlines feel less pressure to slash fares to fill them up. That boosts revenue per passenger.

"The economics are so much better than with the (Boeing) 777-200," Hamilton said, referring to a plane that American uses on many international flights.

American will use the 787 on U.S.-to-Asia routes that it launched using bigger, less efficient planes. Doug Parker, the CEO of American Airlines Group Inc., said it would be an overstatement to say that his airline would have ignored destinations like Beijing without the Dreamliner they are strategic, important markets, he said.

"But the aircraft makes them much more viable and makes expansion into other routes much more likely," Parker said.

Before Thursday, United Airlines was the only U.S. carrier with Dreamliners. Delta Air Lines has ordered some but isn't scheduled to get them until 2020.

Boeing has delivered more than 250 Dreamliners and has more than 800 orders on backlog. A competitor is on the way Airbus has taken 780 orders for the A350 but only two are in commercial service.

Design problems, labor strikes and other issues delayed the Dreamliner's debut. Then there were the overheating batteries that caused regulators to ground the worldwide fleet in 2013 until Boeing came up with a fix. Just last week, U.S. officials directed airlines to shut down the planes' electrical systems every few months to prevent a total loss of power. And Boeing's accumulated costs to build the plane have ballooned to $27 billion.

"Boeing underestimated how complicated all the improvements would be," said Adam Pilarski, an aviation analyst with Avitas. But now, he said, there are enough Dreamliners flying to assure airlines that the fuel savings are real. The late-2014 collapse in oil prices reduced the savings from more efficient planes. But still, Pilarski expects that the Dreamliner will remain in demand, for now. "It's a modern product," he said. "In a few years, we'll want the next new plane."
Last Update: May 08, 2015 10:30 pm
RELATED TOPICS