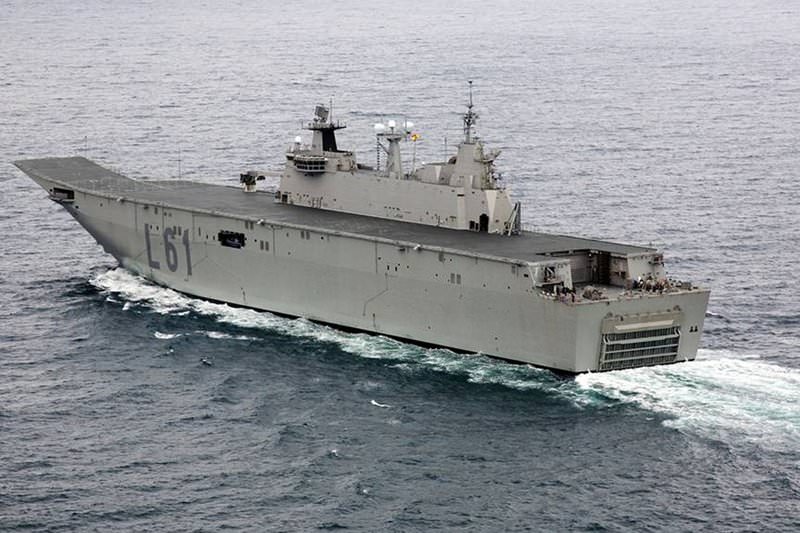 by Sinan Öztürk May 09, 2015 12:00 am
As Turkey's Undersecretariat of Defense Industries (SSM) and Turkish shipyard Sedef Shipbuilding Inc. have signed a contract to build Turkey's first landing platform dock (LPD) on Thursday, this move was interpreted as 'alarming' for Israel, Greece and Greek Cyprus as it would change the whole security balance in Eastern Mediterranean.

The LPD, expected to be completed by 2021, is a part Turkey's national ship (MİLGEM) project and the country's recent moves to develop and improve its own defense industry. Weighing 27,436 tons, 231 meter-long ship will be able to carry 1,200 personnel as well as tanks, helicopters, drones and warplanes with capability of vertical landing and take-off. If built with a 'ski-jump' ramp flight deck, the LPD can also be used by some airplanes with horizontal landing and take-off capability. The ship will also include a full-fledged hospital.

The contract was signed during IDEF'15 defense fair, which acted as a show-off venue for Turkey's booming defense industry.

Spanish shipbuilder Navantia will provide technical assistance for construction of the ship, which will be modeled after Juan Carlos I class L-61 ship used by the Spanish Navy. Tanchum states the LPD will be at least seven times heavier than the largest ships currently possessed by Turkish navy. Navantia also builds two landing helicopter docks (LHD) for Australia, the HMAS Canberra and HMAS Adelaide, which would be the largest ships of Australian Navy once commissioned.

The LPD will be able to sail non-stop for 50 days, while having a range of up to 9,000 nautical miles (17,000 kilometers), which would allow Turkish Navy a strong presence even in the Atlantic and Indian oceans.

"Turkey took a major step in altering the naval balance in the eastern Mediterranean by contracting the construction of a multi-purpose amphibious assault ship that can function as an aircraft carrier, potentially providing Turkey an unprecedented measure of sea control in the region" said Michael Tanchum in his article published on Israeli daily Jerusalem Post.

Tanchum stated that Turkey's move will affect the decision of Israel, Greece and Greek Cyprus in cooperating to extract and export natural gas from Eastern Mediterranean, while claiming that a comprehensive regional agreement depends on Turkey's diplomatic moves and the country cannot economically win a naval arms race, pointing out that only the LPD will cost between $500 million to $1 billion.

Since the 2008 financial crisis, Greece and Greek Cyprus are more than willing to explore, extract and export the gas reserves in Eastern Mediterranean while leaving Turkey out of the equation, interpreted as a quick solution for their financial problems and further pressuring Turkey to give more concessions on isolated Turkish Cyprus.

Turkey's move came at a time when North Africa, across the Mediterranean, and Ukraine, across the Black Sea, are in turmoil. In 2011, during the height of Libyan Civil War, Turkey successfully managed to evacuate its citizens along with many foreign nationals, as well as many wounded Libyans to be treated in Turkish hospitals. To conduct these operations, Turkey had to spare two civilian ferries operating in the Marmara Sea. In the last four years, similar scenarios were rescreened in Tunisia, Egypt, Yemen and Syria, and Turkey had to evacuate thousands of its citizens from conflict zones and played an important humanitarian role as a leading country in the region. The need for a ship to properly conduct such operations while empowering Turkish Navy and its responsive capability had long been stressed by Turkish strategists and media circles.