Migrants in Italy toil to put food on Europeans' plates 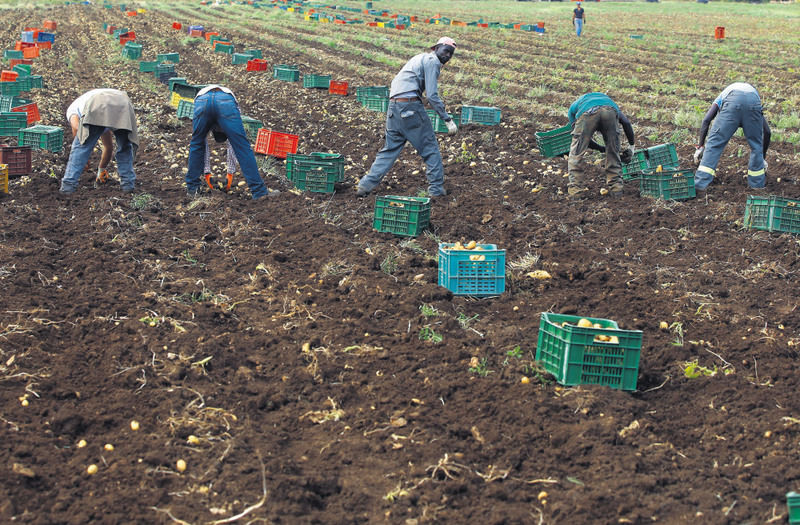 Few know that the migrants who make it to Europe perfom the back-breaking farm labor that locals shun but is critical to feeding the continent. It is the only way of making money for many

Colorful plastic boxes lie evenly spaced on a freshly turned field, ready to be filled with potatoes destined for the plates of diners across Europe. The 14 men lining up to pluck them from the rich soil of eastern Sicily are almost all newcomers to a continent where many eye them with a mix of pity and suspicion.

The desperate quests of record numbers of migrants to cross the Mediterranean have been well-documented. But few know that those who make it here often spend years trapped in an immigration limbo where the only way to make money is to do the back-breaking farm labor that locals shun but which is critical to feeding the continent.

This week, Interior Minister Angelino Alfano suggested that the newcomers do volunteer work while they wait for their asylum requests to be processed. They are more likely, however, to work under-the-table to earn cash to send home or to fund the next leg of their journeys north.

"The work is good," said Khamis, a 33-year-old from Sudan who was harvesting potato fields near Syracuse this week. He said he earned 50 euros ($56) a day, more than the amount typically cited by aid groups. Payment is usually cash in hand, but often a local agent gets a cut. In Italy, which has seen a near-record 26,228 migrants arrive so far this year, would-be refugees are housed in special centers where food and clothing are provided. Depending on their immigration status, some receive pocket money in the form of vouchers or cash. Some are allowed to work while their asylum bids are being reviewed, others must wait months or even years before getting the necessary papers.

Those wishing to escape boredom and privation in overcrowded welcome centers are left with few choices, given Italy's 13 percent unemployment rate. Most do find something, "whether it's legal or on the black market," said immigration lawyer Angela Ghennet Lupo. For men, who make up the bulk of the migrants, this often means working on the farms of Italy's southern breadbasket, which provides a sizeable chunk of the produce that feeds Italy and countries beyond. Competition for jobs is fierce and some decide to move out of the migration centers to live in abandoned stone huts that dot the countryside, in order to be closer to the villages where workers are hired each morning. "The majority lives in dilapidated shacks in the fields without any services, without water, without toilets," said Lupo. "They cook with a little fire on the ground putting big pots on top and they work all day long." Such encampments aren't marked on any maps, but locals know where to find them. "The countryside is big here. You may not see them, but they are there," said Safi Adem, a 38-year-old from Sudan, who offered to show reporters a site.

Adem said he himself wasn't willing to work in the fields and had been lucky enough to get a job with the city of Rome for several years. After that ended, he decided to team up with a fellow migrant and come back to Sicily to start a store selling fruit and vegetables. The business failed, and on Thursday he was heading into Syracuse to wind up the company.

Adem showed the way to a place he called 'Hotel Sudan' the remains of an abandoned old farmhouse surrounded by makeshift shacks, tarps and mattresses where half a dozen men were washing clothes in large plastic tubs. It was clear that nobody there had found work that day. While anti-immigrant sentiment runs high in parts of northern Italy, Sicilian farmers welcome the labor.

While the more desirable jobs such as picking lemons are filled mostly by Sicilians, immigrants tend to the trees and harvest zucchini from the farm's many hundred plastic greenhouses. Lo Bianco pays her employees well about 1,200 euros a month, all above board, so that they are entitled to social security benefits. Other farmers aren't so scrupulous. Alberto Barbieri, of the Italian aid group Doctors for Human Rights, said conditions at sites in Sicily's neighboring region of Calabria were much tougher. "Eighty percent are paid under the table with an average salary of 25 euros a day," he said.

The pressure to work for such low wages is unlikely to ease, since European consumers expect low prices even for prime Italian produce while the flow of migrants is projected to surpass even last year's record of 170,000.
Last Update: May 10, 2015 9:58 pm
RELATED TOPICS