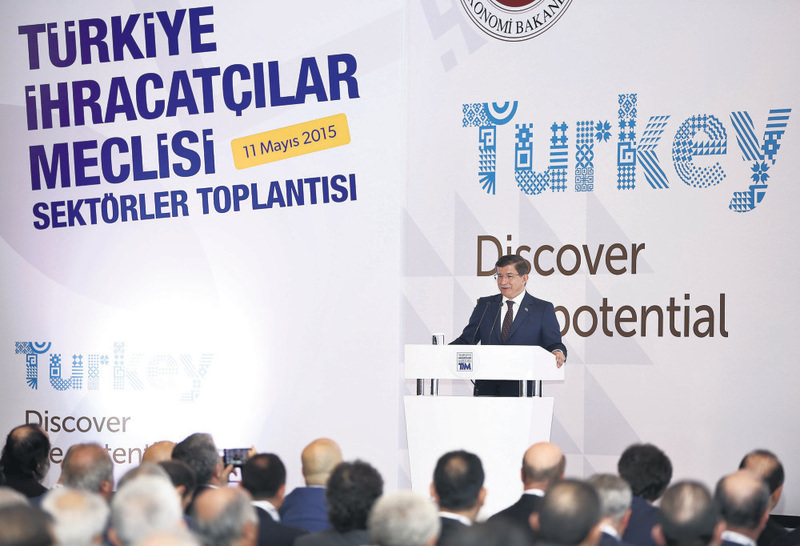 At the Sectors Meeting of the Turkish Exporters Assembly (TİM) held in Istanbul yesterday and attended by Prime Minister Ahmet Davutoğlu and related ministers, Davutoğlu said Turkey needs a qualitative transformation on the way to 2023. He also said it is only possible for Turkey to take a bigger share of the global economy, which is shrinking at the moment, if the country's total exports increase.

TİM Chairman Mehmet Büyükekşi said while Turkish exports are increasing, the proportion of government support offered for exports decreases year by year. Büyükekşi said exporters are requesting this proportion be increased to 1 percent. At the meeting - where the targets of exporting sectors for 2015 to 2023 were discussed along with their problems and solutions - Büyükekşi underlined that Turkey does not have a current account deficit but a deficit of innovation for exports. He said in the long marathon towards 2023, Turkey needs to invest more in innovation in exported goods, increase savings and eliminate any obstacles before direct foreign investments.

Büyükekşi requested that the ratio of government support provided for exports to total exports, which is decreasing on an annual basis, be increased to 1 percent. The founding of a credit guarantee fund for exports, easier access to finding offset applications for the sector, including high-technology products with an high added-value and more investment in defense and aviation, medical devices, pharmaceuticals and pharmacy products, optic and communication devices, electrical products and electronic sectors were among other requests of Büyükekşi from the government. He also highlighted the importance of qualified workers and researchers that are graduate and post-graduate students of basic sciences being employed at research and development centers. "An illegal economy causes unfair competition, which is a great problem for us. Increasing the effectiveness and flexibility of labor markets, and improving support and grants provided for R&D centers, renewable energy investments and energy efficiency, and restoring trust in jurisdiction by an amended constitution, which is based on human rights and the rule of law, are crucial for us," Büyükekşi said.

The TİM chairman also underscored the importance of upgrading the Customs Union agreement with the EU, signing more free trade agreements (FTAs) with other countries and being included in the Transatlantic Trade and Investment Partnership (TTIP) agreement between the U.S. and the EU as crucial interests for exporters. Büyükekşi said the construction of a railway line between Hopa and Batumi, which will ensure that Turkey is connected to the railway line that extends to China from Batumi, Georgia, was their last special request.

Speaking at the meeting, Davutoğlu emphasized for the last 12 years, Turkey showed incredible performance and improved its global competitive power. Yet, he also stressed the need for a qualitative transformation, which is required in order to reach all the targets set for 2023. According to Davutoğlu, the basis of this qualitative transformation is transforming the structure of Turkish exports into exports with high added-value based on research and development, which is essential for gaining a bigger share in the global economy. Praising the performance of Turkish exporters, Davutoğlu said while the global economy was booming in the 1990s, Turkey could only increase its exports from $12 billion to $36 billion, while today when the global economy is following a shrinking trend, Turkish exports have increased from $36 billion to $159 billion. "If global growth exceeds 2 percent thanks to the efforts of the G20 in the coming terms, it is possible for Turkey to increase its exports to $500 billion," Davutoğlu added.

Highlighting the various measures and regulations implemented to increase exports, such as FTAs, Davutoğlu said the principle of the government is to ensure that Turkey expands its economic market without expanding its political borders.

With FTAs, visa exemption policies and work to expand the economic hinterland, Turkey did not suffer from the recent global economic crises, which was mostly due to dynamic and flexible market conditions. While 60 percent of Turkish exports depended on the European market at the beginning of the 2000s, this percentage has now decreased to 45 percent. Moreover, exports to African markets have increased from 4 to 10 percent.
Last Update: May 11, 2015 10:07 pm
RELATED TOPICS