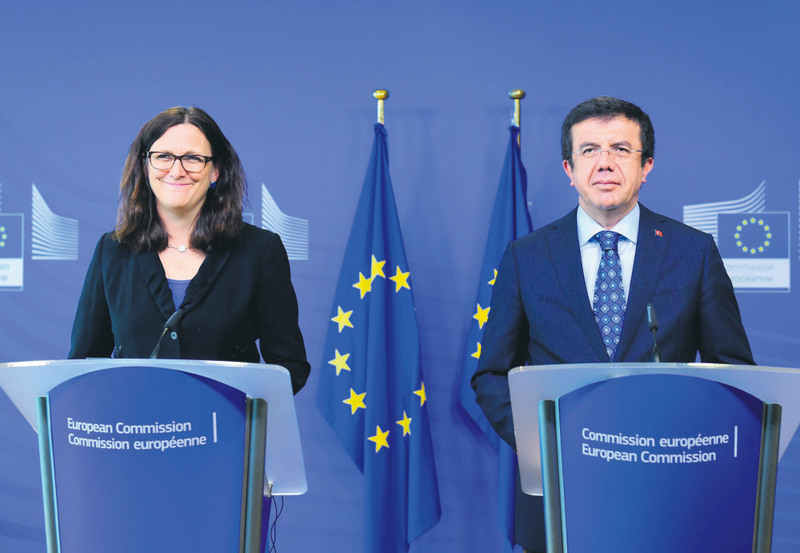 European Commissioner for Trade Malmstrom (L) and Turkey's Economy Minister Zeybekci hold a press conference after their meeting at the European Commission in Brussels.
by Daily Sabah with AA May 12, 2015 12:00 am

Turkey and the EU have agreed to renew the customs union with the 20th anniversary of the first deal on its way. The new deal will include Turkey's involvement in the Transatlantic Trade and Investment Partnership

The first deal to renew the Customs Union agreement between Turkey and the EU has been signed. Economy Minister Nihat Zeybekci held a press conference with the EU commissioner in charge of trade, Cecilia Malmström, at the headquarters of the European Commission (EC) after signing the comprehensive agreement to update the Customs Union agreement, which had claimed to be unfair toward the Turkish side.

The most important points of the new deal that both the EU and Turkish sides have agreed to include are: Turkey will take part in any consultation and decision-making mechanisms; Turkey will be automatically part of any free trade agreement signed between the EU and third countries; the EU will remove all trade obstacles and tariffs that obstruct the free movement of Turkish goods in the EU market that fall within the scope of the agreement; and the EU will include the agriculture, services and public procurement sectors, which were excluded in the 1996 agreement.

According to the EC website, the EU is Turkey's number one import and export partner, while Turkey ranks seventh and fifth in the EU's top import and export markets, respectively. Turkey's exports to the EU stood at $68.5 billion and its imports from the bloc stood at $88.7 billion in 2014. Zeybekci said this new development will push the trade volume forward and provide leverage for Turkey's full EU membership process. Zeybekci added they are pleased to initiate a new agreement on the soon-to-be 20th anniversary of the first Customs Union agreement, which will also be a milestone in Turkish-EU relations. He also said they had agreed on the matters that will be discussed during the negotiations to update the Customs Union agreement with the EU.

He described Turkey's expectations from the process as ensuring that Turkey is more actively involved in the consultation and decision-making mechanism of the EU, a permanent solution to structural problems arising during the adaptation and conformity processes of free trade agreements (FTAs) and finally, the elimination of highway quotas.

"While we will try to formulate a solution to such systematic problems, we will also strive to improve our commercial relations in the agriculture, public procurement and services sectors," added Zeybekci, and said Turkey's most crucial aim is to be a party to the Transatlantic Trade and Investment Partnership (TTIP) agreement to be signed between the EU and the U.S.

He also emphasized that Turkey aims to include all conditions required for full membership to the EU in the updated Customs Union agreement and to fulfill all such terms and conditions. Zeybekci said with such new regulations, he believes integration with the EU will improve, and economic relations between Turkey and the EU will advance.

He said efforts to update the Customs Union agreement also fit into the efforts shown for signing an FTA with the U.S. or becoming a party to the TTIP, and he said if the process is successful, it will facilitate Turkey's involvement with the TTIP. "Being included in the TTIP is a major aim of Turkey in order to achieve our 2023 targets. In this respect, the EU's support is crucial. Hopefully, we will be announcing more substantial steps soon," Zeybekci added.

He underlined that approximately one year is required before the parties can initiate physical negotiations, and added they hope no political developments will take place to prevent this process. Defining updating the Customs Union agreement as an important opportunity to improve relations with the EU, Zeybekci said that as Turkey has never given up on its target of becoming a full member of the EU, such a process will ensure that it draws closer to its target.

Zeybekci continued to stress that if Turkey is not a party to the TTIP, then the Customs Union agreement cannot be maintained.

Malmström said the Customs Union agreement between Turkey and the EU does not cover services, public procurement, certain agricultural products and investments, and is therefore an outdated agreement. "It is time to improve the Customs Union," Malmström affirmed. She further noted that preparations in this respect will start immediately, and they will prepare effect analyses, consult member states and obtain the authorization of the EU Council to carry out the negotiations with Turkey.

Malmström said they are willing to inform Turkey about the progress of the TTIP between the EU and the U.S., and to support Turkey in becoming part of the final agreement. However, the negotiations regarding the Customs Union should be concluded before achieving this.
Last Update: May 13, 2015 10:13 am
RELATED TOPICS