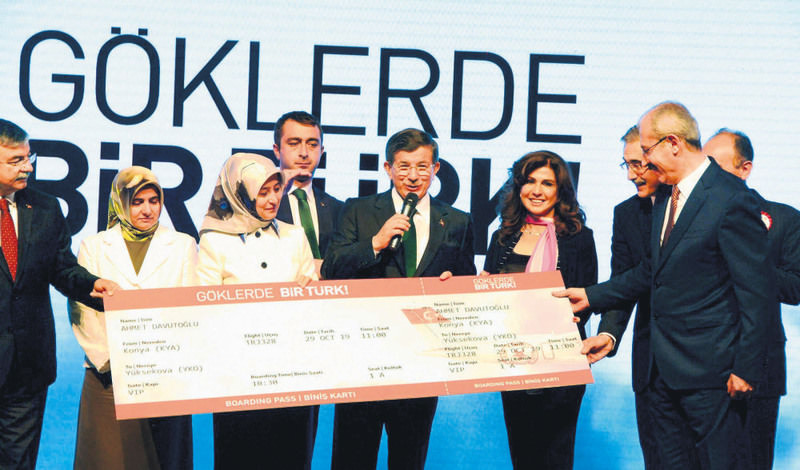 Prime Minister Davutou011flu receives a symbolic ticket from Fatih u00d6zmen, chairman of Sierra Nevada Corporation, during the intoductory meeting of the first domestic airplane project.
by Daily Sabah May 27, 2015 12:00 am

Turkey's first domestic airplane will be a renewed version of Dornier 328-type of airplane called TRJ-328, will be produced by the national defense industry with a 32-seat capacity and will be ready by 2019

Having produced domestic tanks, infantry rifles, unmanned aerial vehicles (UAV) and attack helicopters, Turkey will produce 10 domestic airplanes by 2019 after a $1.5 billion investment. Meeting 60 percent of Turkey's defense requirements, the national defense industry will produce TRJ-328 domestic airplanes with a 32-seat capacity. Prime Minister Ahmet Davutoğlu introduced the TRJ-328. "While the defense industry grew 5 percent worldwide, it showed 15 percent growth in Turkey. In a short period of time, Turkish Airlines has become one of the world's most important [airlines]," he said. 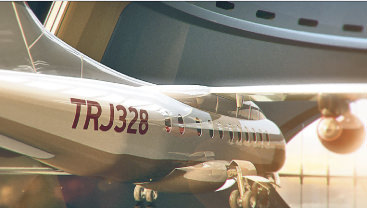 Davutoğlu said the number of domestic flight passengers was 9 million in 2002, but reached 85 million today. "The number has increased almost 10 times," he said. Davutoğlu said that certification process would be completed in a short period after the necessary agreements are finalized and the production rights of the tested and highly reliable Dornier 328 and 628-type airplanes are obtained. He announced that the first Dornier 328-type domestic airplane will begin flights in 2019 and 50 planes will be produced by 2023.

For further developments, STM has reached an agreement with U.S-based Sierra Nevada Corporation (SNC). By 2022, 48 domestic airplanes are to be produced. In the first phase, five airplanes will be produced in Turkey and five others will be produced in the U.S. Domestic airplanes will be assigned as ambulance, maritime patrol, military transportation and security intelligence aircraft. Yılmaz said they will also contract with the Turkish Armed Forces and continued: "It is hard to compete with Boeing and Airbus with airplanes that have a capacity for over 100 people. We observed that no manufacturer produces planes for 30 or fewer passengers. So we started from there." He said that following the production of small airplanes, they will move on to produce planes for 70 passengers and compete with other manufacturers. He said they have not decided on the partnership structure with the company with which they will be partners, but that the production facilities would be located in Ankara or Istanbul.

As part of the domestic passenger plane project, sub-systems for the 32-passenger airplane will be produced by Turkish Aerospace Industries Inc. (TAI), Military Electronic Industries (ASELSAN), Tusaş Engine Industries Inc. (TEI), HAVELSAN, Turkish Airlines Technic, Alp Aviation, Kale Aviation, Turkish Cabin Interior Inc. (TCI), TSI Aviation Seats and other companies under the leadership of STM. The domestic TRJ-328 airplane, which will have a capacity of 32 passengers and a jet engine, will have a flight range of 3,720 kilometers and will be able to take off from 1,400-meter runways. The turboprop model of the plane will have a speed of 620 kilometers and a flight range of 1,850 kilometers.
Last Update: May 27, 2015 9:38 pm
RELATED TOPICS