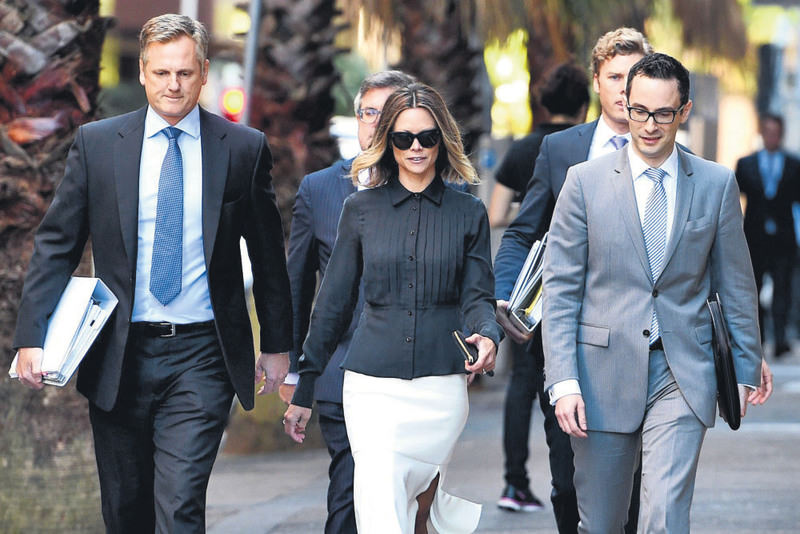 Bianca Rinehart, (center), the daughter of mining billionaire Gina Rinehart, arrives at the Federal Court in Sydney.
by May 28, 2015 12:00 am

Bianca Rinehart, the eldest daughter of Australia's wealthiest person Gina Rinehart, has been appointed trustee of the family's multibillion dollar family trust following a three and half year legal dispute

Rinehart owns the remainder of the family firm, which in turn owns 70 percent of Roy Hill, a Pilbara-based iron ore mine due to start shipments later this year. South Korea's POSCO, Japan's Marubeni Corp and Taiwan's China Steel Corp also have stakes in the mine, which will be Australia's fourth-largest when it reaches full production.

Three of Rinehart's four children - eldest Bianca Rinehart, Hope Welker and John Hancock - sued for control of the trust in 2011. They alleged their mother acted with "gross dishonesty" as trustee, when she pushed out its vesting date until 2068, meaning all four children would not get their shares until they were in their 80s and 90s.

The dispute over the trust contributed to delays in setting up funding for Roy Hill and legal experts said Thursday's ruling allows the children to press their rights as minority shareholders and seek more power via the courts. In a 160-page judgment, Judge Paul Brereton said Rinehart "manipulated" global accountancy firm PricewaterhouseCoopers into providing advice contrary to the best interests of the children. Brereton also said that some of Rinehart's repeated attempts to deter her children from prosecuting the case "closely approach intimidation".

"It is true that there are many who, in the emotional and personal context of family relations, act in a manner in which they would never think to act in a commercial transaction," Brereton said.

"On the other hand, it might be asked, if Mrs Rinehart was prepared to act as she did towards her children, how much further might she be prepared to go in the case of unrelated corporate entities."

Bianca and her brother John Hancock launched legal action in 2011. The youngest daughter Ginia has sided with her mother, while daughter Hope Welker pulled out of the dispute. The case laid bare the family's testy relationship even as its fortunes fell along with the iron ore price. Rinehart relinquished her role as trustee in late 2013, but the case rumbled on as the family could not agree on a successor. "There were huge efforts to put pressure on us, it has been enormously stressful," John Hancock told Reuters.

In a short statement, Hancock Prospecting noted that the trustee will be required to consult with all beneficiaries and get the advice of the court.

The trust has shrunk

by around $2 billion in value since the children began the case, while Rinehart's own fortune has fallen to around $12.2 billion from $17.4 billion in 2014, according to Forbes.