Yozgat city hospital to be financed by 4 foreign banks 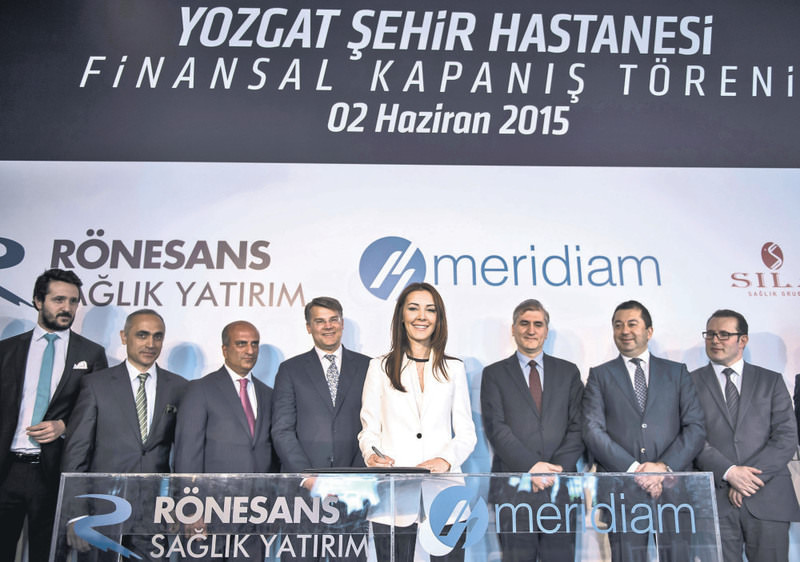 Kayaalp, chairwoman of Ru00f6nesans Holding, signs the finance agreement of Yozgat city hospital. The hospital will be financed by four foreign banks with an amount of 111 million euros.
by Daily Sabah Jun 02, 2015 12:00 am

The government aims to build 17 new city hospitals by establishing Public-Private Partnership projects, Yozgat city hospital is the latest to be constructed by the private sector and financed by international funds

Rönesans Health Investment, a leading actor of the Public-Private Partnership project (PPP), which has begun an important transformation in the health sector, continues to transform the health sector in Yozgat, a central Anatolian city, and Adana.Making its first investment in the 1,550 bed-capacity Adana City Hospital, Rönesans Health Investment announced it has finalized the preparations for its next investment in Yozgat in cooperation with international investment funds Meridiam Infrastructure, Sıla Group and Şam Yapı. The cost of the 475-capacity bed Yozgat City Hospital is 139 million euro, 111 million euro of which would be supplied from Japan's two major banks, Sumitomo Mitsui Banking Corporation and the Bank of Tokyo Mitsubishi, and world giants Germany's Siemens and Italy's Intesa.

Under the auspices of Deputy Health Minister Eyüp Gümüş, Rönesans Holding Chairwoman İpek Ilıcak Kayaalp, Rönesans Health Investment Chairman Kamil Yanıkkömeroğlu and other officials, the financial closure signing ceremony was held yesterday. Speaking at the signing ceremony, Gümüş said Turkey has made serious progress in health sector over the past 10 years. "Health services are provided to nearly 1 million patients a day in our country. However, our hospitals are very old and should be renewed."

Stressing that establishing city hospitals with the PPP model will move Turkey a step ahead in terms of health, Gümüş said, "We pushed the button for 34 city hospitals using the PPP model, and the signing process of 17 hospitals has been completed. When these investments are put into practice, Turkey will have city hospitals with a capacity of 40,000 beds, all of which are equipped with the latest technology. We are conducting the process in cooperation with Turkey's most powerful companies and international banks. We expect this to be a model not only for Turkey but also for the world. We aim to attract nearly 2 million people who travel for health purposes to our country by opening these investments to international health tourism."

İpek Ilıcak Kayaalp said the project would be completed by 2017 and people in Yozgat would have a hospital equipped with the latest technology. "The aim of the project is to increase the bed capacity and improve the quality of health services by adding a new health facility to the existing ones in Yozgat," Kayaalp said, adding that PPPs were one of the most important keys to reaching sustainable and quality health services. "Being among the actors of this significant transformation that Turkey has implemented in the health sector is a matter of pride and joy for us," she said, adding that receiving support from international investment funds and financial institutions was a sign of trust placed in both Rönesans Holding as well as Turkey.

Meridiam's Business Development Director Marco Rosso said as a company believing in Turkey's economy and its promising future, they were happy to be involved in the Yozgat City Hospital project. "We believe this project will play a very important role in improving the life and health quality of people living in Yozgat and its environment," Rosso added.
Last Update: Jun 03, 2015 3:19 pm
RELATED TOPICS