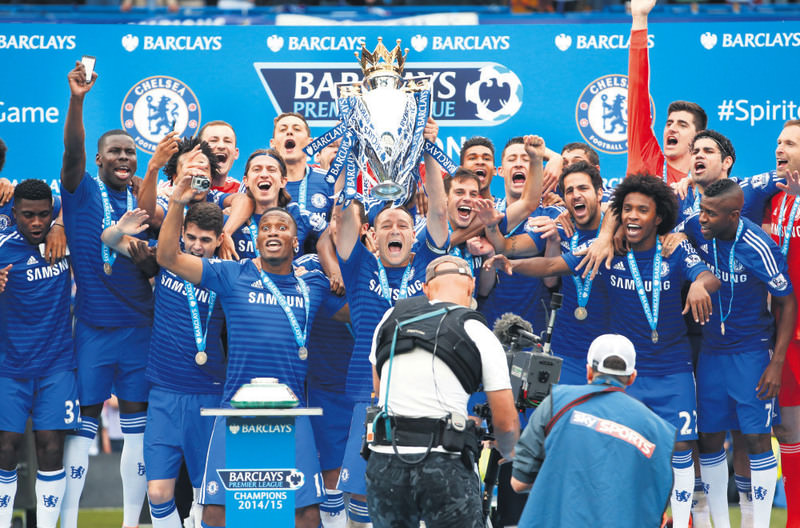 Chelsea's John Terry celebrates with the trophy and teammates after winning the Barclays Premier League. No English clubs reached the quarter-finals of the Champions League, but they are still the envy of the continent.
by Jun 05, 2015 12:00 am

The Premier League continues to pull away from its European rivals in terms of total revenue, if not quality on the pitch, and the bubble looks unlikely to burst any time soon.

English clubs were eclipsed by the likes of Barcelona, Bayern Munich and Paris St Germain in this season's blue-riband Champions League, with none of them reaching the quarter-finals, yet they continue to be the envy of the continent when it comes to the size of their bank accounts.

According to Deloitte's latest Annual Review of Football Finances, based on the 2013-14 season, the 20 Premier League clubs generated record revenue of 3.26 billion pounds ($4.99 billion), a rise of 29 percent on the season before.

That was 1.4 billion pounds higher than Germany's Bundesliga, second on the list, and more than Spain's La Liga and Italy's Serie A combined. Even the Bundealiga's previous advantage in commercial revenues is eroding fast.

The Premier League's current domestic television deal with Sky and BT Sport, the first season of which was 2013-14, accounts for 78 percent of the increase in total revenues. And with an eye-watering new 5.136 billion pounds three-year deal starting in 2016-17, a 70 percent rise on the current one, the Premier League's position at the top of the food chain looks assured for years to come. "The impact of the Premier League's broadcast deal is clear to see," Dan Jones, partner in the Sports Business Group at Deloitte, said. "In 2013/14 even the club receiving the least from domestic league broadcast distributions earned more from this source than all but five other European clubs."

"On a continental level, it is difficult to see any of the other 'big five' European leagues closing the gap in the near term, let alone catching up with them."

Restraint in the rise of players' wages and the effects of the UEFA's Financial Fair Play (FFP) helped Premier League clubs make a combined operating profit of 614 million pounds in 2013-14, up from 82 million in 2012/13, and an aggregate pre-tax profit of 187 million - the first since 1998-99.

The Premier League's wages to revenue ratio fell to 58 percent in 2013-14, down from 71 percent, with combined net debts showing a six percent fall.

"The current broadcast deal comes as cost control regulations, at both domestic and European level, have caused many clubs to rein in their spending relative to the revenue they are now capable of generating," Jones said. "The end result has been a remarkable turnaround in profitability." Beneath the Premier league, however, the picture is not so rosy as owners gamble on reaching the promised land.

The wages to revenue ratio in the second-tier Championship was 105 percent in 2013-14 with almost half the clubs having wage costs greater than revenue.