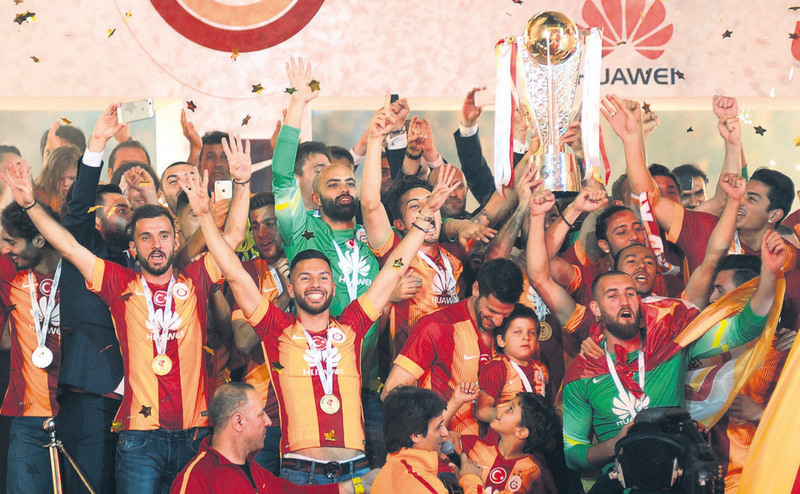 Galatasaray players celebrate their Turkish Super League trophy during a championship ceremony at TT Arena in Istanbul. Galatasaray won the Turkish league title for the 20th time.
by Daily Sabah Jun 08, 2015 12:00 am

While Manchester United have reclaimed their status as the club with the most valuable brand exceeding $1 billion, Galatasaray came 19th in Brand Finance's top 50 clubs list with a value of $177M

Galatasaray, which recently won the Spor Toto Super League title, slipped two places from last year to 19th in Brand Finace's most valuable club in the world index, while runners up Fenerbahçe are 33rd. Galatasaray's brand is estimated to be worth $177 million while Fenerbahçe's is worth $120 million, an increase of $33 million compared to last year. Beşiktaş fell out of the top 50 clubs list this year after they were ranked 43rd with $70 million in brand value last year. In the list based on the clubs' total value, Turkey is ranked sixth following England, Germany, Spain, Italy and France.

Despite winning no trophies again last season, Manchester United is the world's most valuable football brand, replacing Bayern Munich, according to a report from consultancy Brand Finance.

Record-breaking commercial deals and the looming windfall from the Premier League's next broadcast rights contract have lifted United back to the top of Brand Finance's Football 50 list, published yesterday.

In a show of faith in manager Louis van Gaal's recent success in reversing the on-field decline, the Old Trafford side climbed two places to overtake Bayern Munich and Real Madrid.

Neighbors Manchester City and Chelsea complete the top five, Arsenal, Liverpool and Tottenham make the top 10, and there are a total of 17 English clubs in the top 50.

Barcelona, who won the Champions League on Saturday night, trail in sixth, while runners-up Juventus are behind Spurs in 11th. Brand Finance, the leading international brand valuation and strategy consultancy, uses a wide range of factors to calculate both a club's brand value and brand rating.

The brand rating reflects the image of the club, as the public would perceive it, and takes into account reputation, heritage, on-pitch performance, and how aware people are of them.

That brand rating is then combined with revenue, both current and projected, to estimate a brand value, which is of particular interest to the marketing and sponsorship industries. United lost the top spot in the list to Bayern in 2013 and dropped to third last year following a dismal first campaign without the all-conquering Sir Alex Ferguson as manager. But a new 750-million-pound 10-year kit deal with Adidas and the prospect of a three-year TV deal starting in 2016 worth more than 5 billion pounds in domestic rights alone sent their brand value rocketing by 63 percent.

Allied with the return to the Champions League engineered by Van Gaal, the first football club brand value in excess of $1billion could in itself attract more business to United. "It is reflective of a show of faith from sponsors," Brand Finance's Robert Haigh told City A.M. "It shows other interested parties that they are a club worth sticking with and still at the top of the game. It's encouraging for investors too, so could affect share price in the short-term."

Fellow European giants such as Bayern, Real and Barcelona are finding their progress checked by the relative lack of competition within their domestic leagues, the report notes. Manchester City enjoyed another year of huge growth, their brand value rising 57 percent to $800 million. That placed them fourth in the list, one spot ahead of new Premier League champions Chelsea, whose brand value swelled by 58 percent to $795 million. Seventh-placed Arsenal dropped a place despite seeing brand value soar 39 percent to $703 million. Liverpool, in eighth, experienced 23 percent growth to $577 million, placing them above Qatar-backed French champions Paris Saint-Germain. Tottenham's brand value grew 47 percent to $360 million.
Last Update: Jun 08, 2015 11:56 pm
RELATED TOPICS