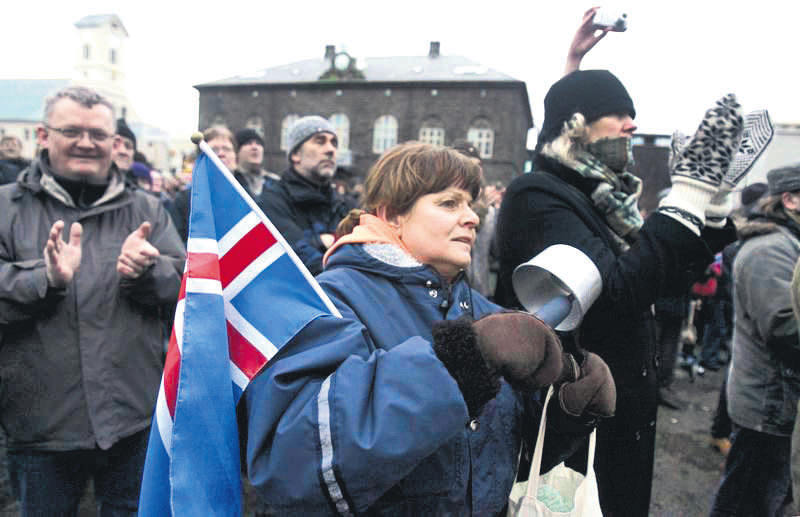 A peaceful protest near Iceland's Parliament house in Reykjavik Jan. 24, 2009. Iceland, one of the richest countries in the world in 2007, plunged into crisis when it fell victim to the global credit crunch.
by Jun 09, 2015 12:00 am

Iceland said on Monday it would impose a 39 percent tax on creditors wanting to take assets reclaimed from its failed banks out of the country, a first step to lifting capital controls that have been in place since its 2008 crash.

The government hopes the tax will prevent a sudden exodus of capital that could crush the crown currency and hurt the economy as it recovers from the spectacular collapse of the North Atlantic island's bloated banking sector seven years ago.

But creditors with billions of dollars worth of assets frozen in three bankrupt lenders could launch legal proceedings against the country, risking years of action that would keep Iceland locked out of international markets.

The government said investors in Icelandic assets such as government bonds could also get their money out of the country by selling crowns to the central bank. Alternatively, they could reinvest their capital in newer government debt that will be convertible out of crowns at maturity.

Because the central bank controls the exchange rate, investors using its currency auctions to repatriate their money could get a less favourable price for their crowns than in the currency markets.

"The total value of the assets underlying the problem addressed in the authorities' strategy is about 1,200 billion Icelandic crowns," the government's debt management agency said in a statement. That amount is roughly $9 billion although due to capital controls it is difficult to determine a market exchange rate.

Iceland imposed controls on the movement of capital seven years ago after its three biggest lenders - Glitnir, Landsbanki and Kaupthing - folded under the weight of their debts as the global financial crisis unspooled.

With the banking sector's assets once calculated at 10 times Iceland's gross domestic product, their spectacular meltdown came to symbolise the greed and mismanagement of the global financial system and of governments' failure to police it.

Yesterday's announcement followed a late night debate in parliament on Sunday which closed down loopholes regarding transactions that can be made using money from the failed banks.

The government estimated in March that creditors of the failed banks had about 500 billion Icelandic crowns ($3.75 billion), roughly a quarter of the country's GDP, in recovered assets that they would want to repatriate. An amount equivalent to 15 percent of GDP invested by foreigners in Icelandic assets such as government bonds has also been frozen and authorities fear it too may be pulled out once controls are lifted.