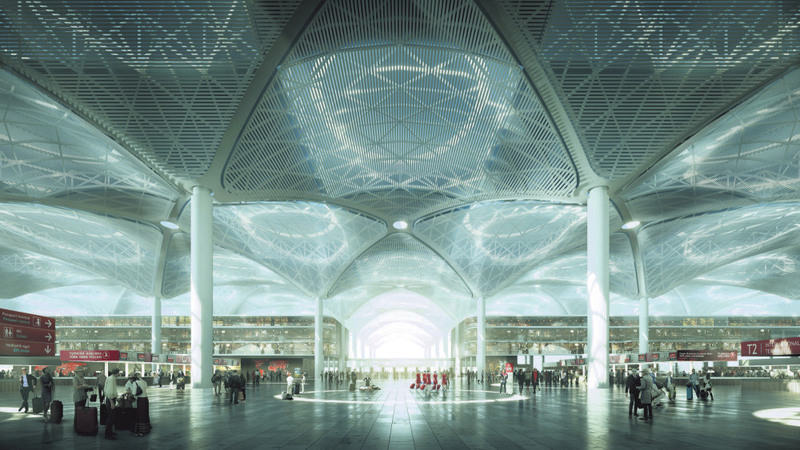 by Daily Sabah Jun 19, 2015 12:00 am
Russia's largest bank, Sberbank, will provide a loan of 500 million euros for the third airport that is being built in Istanbul and is one of the largest projects in the world. The bank signed a memorandum of understanding for the loan. Sberbank Vice Chairman Sergey Gorkov on behalf of the bank and Mehmet Cengiz, Nihat Özdemir and Cemal Kalyoncu on behalf of İGA Havalimanı İşletmesi A.Ş., signed the memorandum at the St. Petersburg International Economic Forum (SPIEF 2015). The loan will be granted via Turkey's Denizbank, which is owned by Sberbank. In September 2012, Sberbank acquired a 99.85 percent stake in DenizBank, which is among the top 10 private banks in Turkey and operates across the entire country with 599 branches. The loan of 500 million euros from Sberbank covers 16 years. Thirty million euros of the loan will be used as business capital. Gorkov said: "We are happy to provide loan support for the construction and operation of the largest airport in the world. After the project is completed, the airport is planned to have a capacity of 150 million passengers. We will continue to develop our cooperation with leading Turkish companies." The first phase of the third airport, whose contract was held in the model of build-operate-transfer, and will cost nearly 26.14 billion euros including value-added tax, will have a capacity of 90 million passengers per year.

In the first phase of the project, which started in May, the largest terminal in the world, three runways, runway-apron-taxiing fields, air traffic control towers and some other buildings will be completed. Biding was held for the contracts to design these parts. The contracts for the buildings are expected to be completed with construction beginning in the upcoming months. The first phase of the airport is expected to be completed by Oct. 29, 2017, the 94th anniversary of the Republic of Turkey's establishment. While 60 percent of the $4.5 billion loan, which is expected to be signed in the upcoming period, will be granted by Ziraat Bank, Halkbank and Vakıfbank, the remaining 40 percent will be provided by Garanti Bankası, Yapı Kredi, Denirbank and Finansbank. The loan will be for 16 years, and the first four years will be without principal repayment.
Last Update: Jun 19, 2015 10:18 pm
RELATED TOPICS