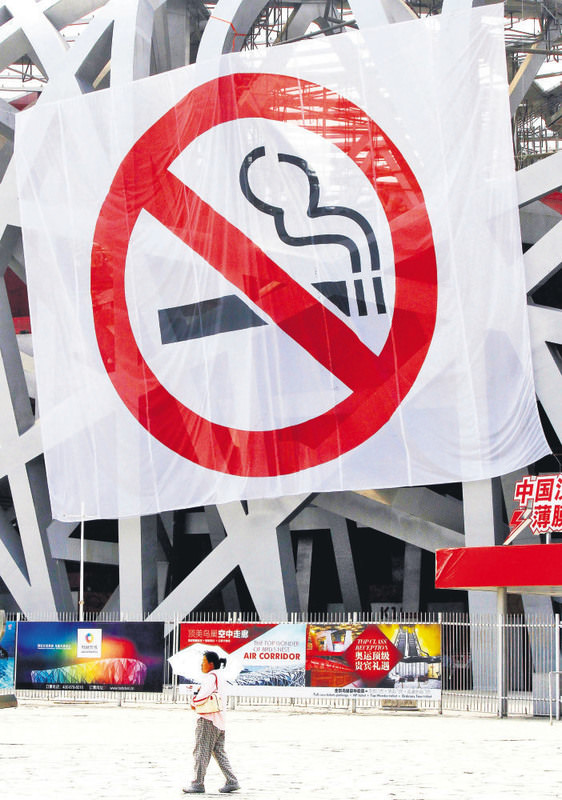 A large anti-smoking banner hangs on the exterior of the Bird's Nest stadium as a tourist walks by in Beijing, China. Beijing implemented a new smoking ban that took affect June 1.
by Jun 23, 2015 12:00 am

Scientists who have devoted years developing medicines to cure diseases are now working for tobacco companies to make e-cigarettes. They say they are trying to improve public health

Altria Group Inc, makers of Marlboro, has recruited dozens of scientific and healthcare experts, as have independent e-cigarette companies such as NJOY. They bring experience developing inhalation devices and navigating the U.S. Food and Drug Administration, valuable knowledge in the new world of electronic cigarettes. They say they're trying to improve public health.

"We were looking at drugs that make people very ill and maybe extend their life by 12 to 14 weeks," said Gizelle Baker, a PMI biostatistician based in Neuchatel who previously worked at the cancer drug developer Poniard Pharmaceuticals. "If you have a product that prevents cancer in the first place you can have a much bigger impact on public health."

The goal is to improve the current generation of e-cigarettes and, where possible, provide evidence that they reduce the risk of disease. Companies that succeed could have an advantage in a market that Bonnie Herzog, an analyst at Wells Fargo Securities, sees surpassing combustible cigarettes in the U.S. within the next decade. Products declared reduced risk by the FDA could be treated with a lighter regulatory hand.

"If tobacco companies can prove there is reduced risk, e-cigs are likely to remain less regulated and taxed than cigarettes," said Philip Gorham, an analyst at Morningstar who views PMI as leading the way in the industry. "If they can't, they will likely be subject to the same restrictions."

PMI has poured more than $2 billion into developing and assessing reduced risk products. Next year it plans to apply for a modified risk claim with the FDA for its iQOS product, a tobacco stick that is heated just enough to produce an aerosol but doesn't combust. Burning tobacco produces most of its toxic chemicals. The company is betting the presence of real tobacco may make it more satisfying to smokers than existing e-cigarettes. It is also developing next-generation e-cigarettes.

But proving a product reduces risk requires sophisticated science, and the FDA wants to see health benefits for both individual smokers and the population as a whole. Manuel Peitsch, a professor of bioinformatics at the University of Basel and former senior official at Novartis AG and GlaxoSmithKline Plc, helps lead a effort at PMI to analyze the constituents in vapor, assess their effect on cells and model how likely the products are to cause disease.

The company is also conducting clinical trials in humans to assess whether the products reduce a person's exposure to harmful constituents and, if so, whether that reduction corresponds to a lower risk of developing lung cancer, heart disease or chronic obstructive pulmonary disorder.

Tobacco companies have not historically had these skills in-house. But they are the life blood of the pharmaceutical industry and that is where tobacco companies are turning for talent. "They have in essence been preparing for this for 20 years," said Dr. David Kessler, the former FDA commissioner who led the agency's investigation into the tobacco industry in the 1990s. "They have understood for a long time that they are in the nicotine-delivery business."

Tobacco executives say they have found willing recruits from the pharmaceutical industry, thanks in part to a wave of mergers and acquisitions that left many researchers looking for work. The 2008 financial crisis led to tens of thousands of job cuts and rattled even those who retained their positions. Not all companies have the resources to conduct the kind of clinical trials being run at PMI, but many are looking for medical device experts who can help make higher-quality products. Some healthcare recruits are willing to develop reduced risk tobacco products but not for a company that also sells cigarettes. "The whole set-up is schizophrenic," said Dr. Lars Erik Rutqvist, an oncologist and former professor at Sweden's Karolinska Institute who has been approached by big tobacco companies before. "I wouldn't want to be part of that because they still make most of their money from cigarettes."