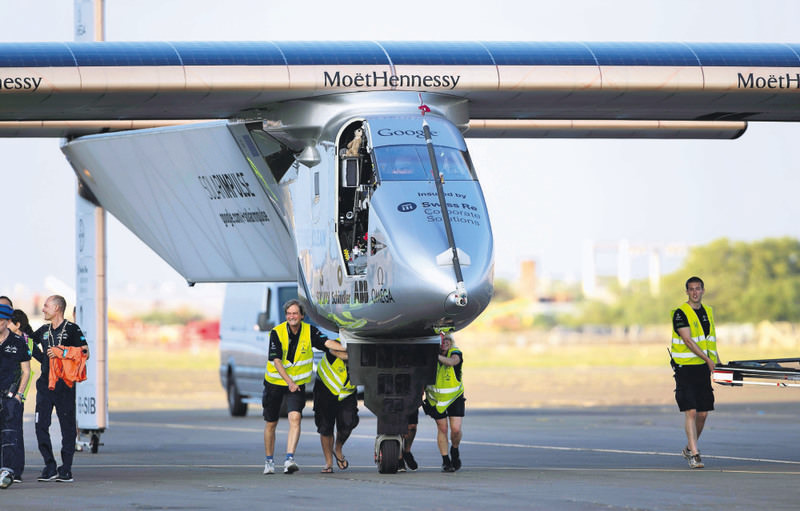 by Associated Press Jul 15, 2015 12:00 am
A team trying to fly a solar-powered plane around the world said Wednesday it is suspending the journey in Hawaii after the plane suffered battery damage during its record-breaking flight to the islands. The Solar Impulse team said in a news release that it will continue the attempt to circumnavigate the globe, but irreversible damage caused by overheating batteries has grounded the flight until at least April. The batteries aboard Solar Impulse 2 overheated on the first day of its trip from Japan to Hawaii, and there was no way to cool down the system, the team said. The company says there was no weakness with the technology, but the team didn't anticipate temperature fluctuations associated with rapid altitude changes in a tropical climate. Pilot Andre Borschberg and his single-seat aircraft landed at Kalaeloa, a small airport outside Honolulu, on July 3. His voyage of nearly 118 hours from Nagoya, Japan, broke the record for the world's longest nonstop solo flight, his team said. "Solar Impulse is attempting a historic first of flying around the world only on solar energy," the pilots said in a statement. "And while Solar Impulse has completed eight legs, covering nearly half of the journey, setbacks are part of the challenges of a project which is pushing technological boundaries to the limits."

The wings of Solar Impulse 2, which stretch wider than those of a Boeing 747, are equipped with 17,000 solar cells that power propellers and charge batteries. The plane ran on stored energy at night.

The aircraft took off in March from Abu Dhabi, the capital of the United Arab Emirates, then made stops in Oman, Myanmar and China. It then made an unplanned stop for nearly a month in Japan after high winds damaged a wing.

The trans-Pacific leg was the riskiest part of the plane's global travels, as there was nowhere for it to land in an emergency. The plane's ideal flight speed is about 28 mph, though that can double during the day when the sun's rays are strongest. The carbon-fiber aircraft weighs more than 5,000 pounds, or about as much as a minivan or midsize truck. The airplane will be housed in a University of Hawaii hangar at the Kalaeloa airport on Oahu while repairs are made. The team says it will also research and test other cooling methods to prevent more overheating.
Last Update: Jul 15, 2015 9:55 pm
RELATED TOPICS