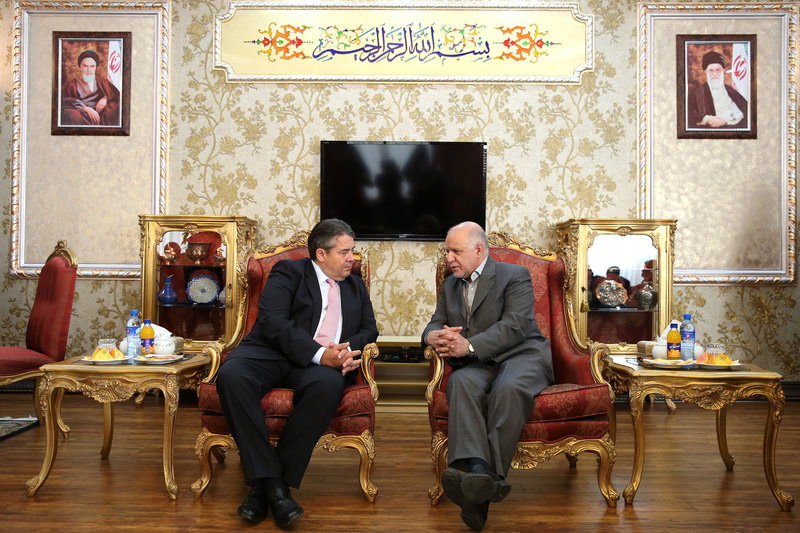 An old issue is on at the agenda of Germany during Gabriel's visit to Iran. After a weak attempt to convince Iran to recognize Israel as a state, the German minister steps back to prioritize economic benefits

German Vice Chancellor and Economy Minister Sigmar Gabriel was set to meet with Iranian President Hassan Rowhani yesterday, marking the first trade talks between a Western politician and Tehran since the country reached a historic nuclear agreement with six world powers earlier this month. Gabriel, who acts as a deputy for Chancellor Angela Merkel and heads Germany's center-left Social Democratic Party (SPD), said that a joint commission would launch regular trade talks in early 2016 after a hiatus of 14 years due to a drawn-out nuclear dispute.

Joined by a delegation of about a dozen industry leaders, the vice chancellor was set to meet with Rowhani later on Monday after Daily Sabah went to print in order to facilitate trade between the two countries. The Association of German Chambers of Commerce and Industry hopes to quadruple exports to Iran within the next four years, raising it from 2.39 billion euros ($2.6 billion) in 2014 to more than 10 billion euros. On the other hand, trade talks were not the only issue on Gabriel's agenda. German officials have not hesitated to articulate their country's support for Israel to be recognized as a state by Iran. Germany believes Iran should rethink its stance on Israel, as last week's nuclear deal means it must "bear new responsibilities at home and abroad," according to the minister. Gabriel said the deal had laid a foundation for better cooperation but differences remained. "With the nuclear agreement and the economic recovery that will surely come after it, Iran will also bear new responsibilities, at home and abroad," he told delegates at a conference in the capital. "You must understand that for us Germans, the security of the state of Israel is also of great importance. ... I understand how difficult the debate is, and we in Germany also believe that the Palestinians have a right to their own state. That must be our shared international goal."

The attempt to raise the topic of recognizing the state of Israel was unsuccessful, with Foreign Ministry spokeswoman Marzieh Afkham saying that the country's refusal to do so had been "articulated clearly several times in the past 35 years." Iran does not recognize Israel as a state, and officials routinely refer to its leaders as the Zionist regime.

However, it seems like the German government will not allow political differences to block economic benefits. Gabriel said differences over Israel should not affect efforts to improve Iran-German relations after the nuclear deal, which has given hope for a major economic revival in the Islamic republic when sanctions are lifted in coming months. "The test of true friendship is when you can discuss difficult issues openly, in a spirit of partnership and respectfully -- that shows how close the friendship is," Gabriel said. "Nothing needs to change in that friendship, even if we hold different views." Iran's Foreign Ministry spokeswoman Afkham also sought to isolate the disagreement about Israel, saying such differences were not new and had not affected other "constructive contacts." "We have completely different positions on regional issues with Germany, and over the last 35 years we have expressed on many occasions, in negotiations, our positions very clearly," she said, according to the ISNA news agency. "The main part of the dialogue is about the prospect of bilateral cooperation, and naturally we will express our concerns about the region, including existing threats, including threats of the Zionist regime and the roots of the crises in the region."