Mitsubishi apologizes for using US POWs as slaves 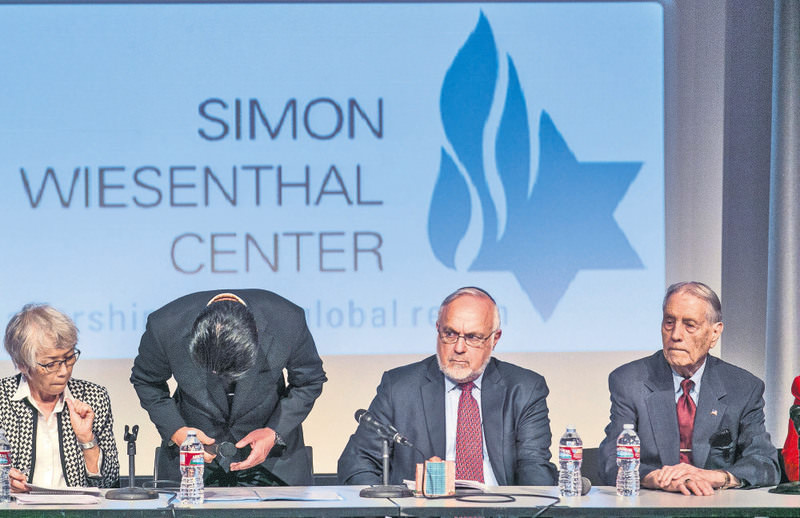 Hikaru Kimura, senior executive officer of Mitsubishi Materials, bows to offer an apology to 94-year-old James Murphy (far right), a U.S. prisoner of war during World War II, as well as relatives of other former POWs.
by Jul 21, 2015 12:00 am

Japan's Mitsubishi issued a landmark apology to U.S. prisoners of war who were forced to work in its mines, more than 70 years ago during World War II. Mitsubishi's initiative is the first of its kind by a Japanese firm

Construction company Mitsubishi Materials Corp became the first major Japanese company to apologize for using captured American soldiers as slave laborers during World War Two, offering remorse on Sunday for "the tragic events in our past." A company representative offered the apology on behalf of its predecessor, Mitsubishi Mining Co, at a special ceremony at a Los Angeles museum.

"Today we apologize remorsefully for the tragic events in our past," Mitsubishi Materials Senior Executive Officer Hikaru Kimura told an audience at the Simon Wiesenthal Center's Museum of Tolerance in Los Angeles. In all, about 12,000 American prisoners of war were put into forced labor by the Japanese government and private companies seeking to fill a wartime labor shortage, of whom more than 1,100 died, said Rabbi Abraham Cooper, an associate dean at the Simon Wiesenthal Center.

Six prisoner-of-war camps in Japan were linked to the Mitsubishi conglomerate during the war, and they held 2,041 prisoners, more than 1,000 of whom were American, according to nonprofit research center Asia Policy Point.

Mitsubishi Materials Corp's predecessor ran four sites that at the time of liberation in 1945 held about 876 American prisoners of war. Twenty-seven Americans died in those camps, Asia Policy Point said. While previous Japanese prime ministers have apologized for Japan's aggression during World War Two, private corporations have been less contrite.

On Sunday, Kimura was flanked by Yukio Okamoto, a forced laborer in a copper mine and a special advisor to Japanese Prime Minister Shinzo Abe, along with an image of American and

Japanese flags. In the audience were other forced labor survivors and family members.

"This is a glorious day," said 94-year-old veteran James Murphy, who survived working at Mitsubishi Mining's Osarizawa Copper Mine and the infamous Bataan Death March in the Philippines. "For 70 years we wanted this." The apology comes near the 70th anniversary of the end of the war.