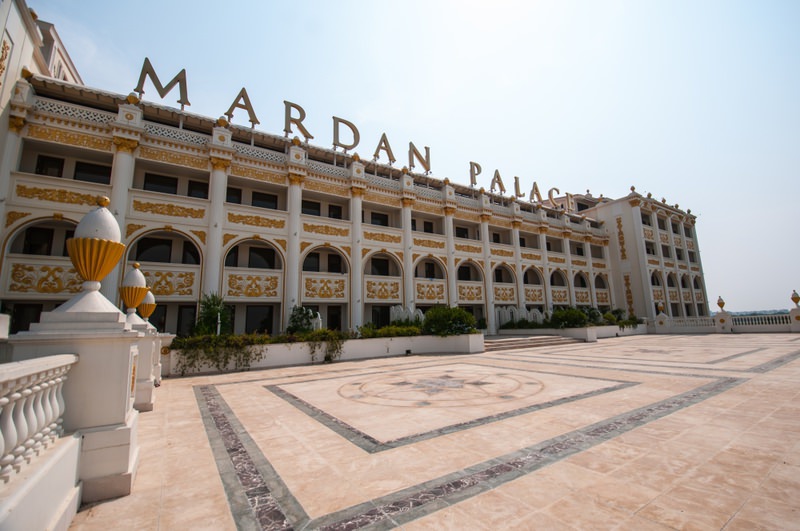 by Daily Sabah Aug 02, 2015 12:00 am
The general manager of the Mardan Palace Hotel, Çetin Pehlivan, said the hotel has restructured its debt, and dismissed allegations about the hotel receiving warrants of attachment. Mardan Palace, which was built as one of the most luxurious hotels in the world by Azeri-origin Russian businessman Telman İsmailov in the Kundu region of Antalya at a cost of nearly $1.4 billion, has been in the news recently due to spiraling debt and receiving warrants of attachment.

Pehlivan said İsmailov has faced many hardships and problems for being a foreign investor during the project period but he hasn't lost his faith and respect in Mardan Palace and its employees.

Reminding that the hotel entered the sector in 2009 with the "bed and breakfast" concept, Pehlivan said they couldn't compete with the all-inclusive concept common in Turkish tourism and hence didn't meet the expectations of guests, which is why they had to adopt the "American plan" and "all-inclusive" concept.

"The change of concept brought heavy burdens ranging from the number of employees to the capacity of service products. Financial losses and payouts because the low occupancy rate that occurred in the first two years started to negatively affect the current operations despite growing occupancy rates thanks to the increasing momentum in recent years. These trying times could be overcome by restructuring the old debts and we can still continue on our way as Mardan Palace. We are reaping the fruits of ouractions, especially in the fields of sales and marketing," stated Pehlivan.

He emphasized that the hotel will not receive any warrants of attachment since the debt to Italian company Artdecor has been restructured, and they are no longer back on their payments.

Pehlivan said Mardan Palace received some merger, acquisition and partnership offers after its debts were restructured. "We have been receiving various offers especially from international chain brands since the opening day. This indicates that our brand has a privileged position in the world tourism scale. Our company is evaluating the offers. İsmailov will choose the one that will carryour brand ahead," concluded Pehlivan.
Last Update: Aug 02, 2015 11:34 pm
RELATED TOPICS