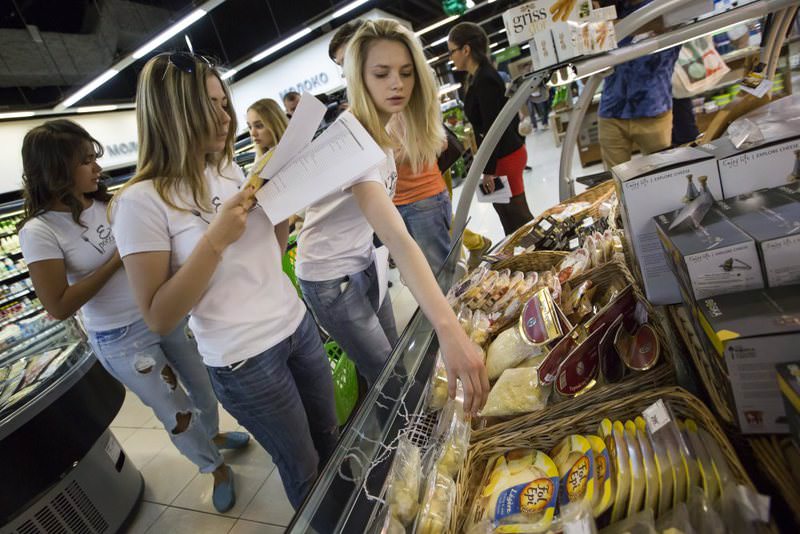 by Aug 07, 2015 12:00 am
Russian government plans for mass destruction of banned Western food imports have provoked outrage in a country where poverty rates are soaring and memories remain of famine during Soviet times.

Even some Kremlin allies are expressing shock at the idea of 'food crematoria' while one orthodox priest has denounced the campaign, which officially began yesterday, as insane and sinful. However, the authorities are determined to press on with destroying illegal imports they consider "a security threat". Russian TV showed a small mountain of illegally imported European cheese being bulldozed yesterday while even before the official start, zealous workers threw boxes of European bacon into an incinerator.

Moscow banned many Western food imports last year in retaliation for sanctions imposed by the United States, European Union and other of their allies during the confrontation over Ukraine. But now many Russians say the government has lost sight of the everyday struggles faced by ordinary citizens.

More than 267,000 people have backed an online petition on Change.org, an international website that hosts campaigns, calling on President Vladimir Putin to revoke the decision and hand the food to people in need.

"Sanctions have led to a major growth in food prices on Russian shelves. Russian pensioners, veterans, large families, the disabled and other needy social groups were forced to greatly restrict their diets, right up to starvation," it says. "If you can just eat these products, why destroy it?"

With annual food price inflation running at over 20 percent, public indignation has been deepened by Russian media reports that the agriculture ministry was tendering to buy "mobile food crematoria" to speed up the destruction. Agriculture minister Alexander Tkachev declined to comment on Wednesday.

Putin's decree ordering the food to be destroyed entered into force yesterday. It does not specify methods but says the process should be carried out "by any available means" and videotaped, apparently to prevent corrupt officials from simply helping themselves and holding a feast.

How much food has evaded the embargo is unclear, but considerable quantities appear to have slipped through the net by various routes, including via Belarus.

The ban, currently in place until Aug. 5, 2016, covers a wide range of imports including pork, beef, poultry, fish and seafood, milk and dairy products, fruits, vegetables and nuts. It applies to food from the United States, EU, Canada, Australia and Norway.

Notwithstanding the petition, no one starves in modern Russia, unlike in the Soviet era when countless millions perished between the 1920s and 1940s from hunger and related disease in both peace time and World War Two.

After the fall of Communism, Russians developed a strong appetite in the 1990s for Western food imports from cheap U.S. chicken quarters to fine French cheeses for the newly wealthy.

Now the soaring food prices are hurting the poor at a time when the economy is in crisis due to the effects of the sanctions and a steep fall in the price of oil, Russia's main export. The rouble has lost more than 40 percent of its value against the dollar and overall inflation is above 15 percent.

The Rosstat statistics agency says the number of Russians living below the poverty line - defined as those earning less than 10,400 roubles ($160) a month - has jumped. In the first quarter this year, the total hit 23 million, or 16 percent of the population, up from more than 16 million people, or 11 percent of Russians last year.

But even some government allies are critical. "I don't understand how food can be destroyed in a country that lived through the horrible hunger during the war and tough years that followed," said a prominent pro-Kremlin TV anchor, Vladimir Solovyov.

Authorities in several regions have already got to work on what they said were illegal imports.

"Any product without documents poses a security threat and should be destroyed," said Andrei Panchenko, the head of agricultural watchdog in the Belgorod region, as workers threw the boxes of bacon into a stove.

Officials say the embargo will encourage Russian producers to fill the gap. Now the authorities are also proposing to limit imports of X-ray machines and defibrillators for hospitals, which are already complaining of poor equipment. Even condoms could make it to the list of restricted imports.

One priest from the Russian Orthodox Church, which enjoys close ties with the Kremlin, expressed his anger.

"My grandmother always told me that throwing away food is a sin," the cleric, Alexey Uminsky, was quoted by the website 'Orthodoxy and the World' as saying. "This idea is insane, stupid and vile."

"Such an idea can only appear with a man who has been in no need for anything in recent decades and is ready to do something like that for populism and quasi-patriotism," he added.

Putin's spokesman Dmitry Peskov offered little hope of a change of heart, saying: "The presidential decree is taking effect and must be carried out."

Peskov said Putin was aware of the petition but cast doubt on the numbers, saying the website did not vet votes carefully enough. But the Kremlin has hit a raw nerve with many Russians.

"To destroy food with this standard of living is a crime against one's own nation!" wrote a backer of the petition who gave her name on the website as Natalya Afanasieva. "Come to your senses, Mr. President, finally take at least some pity on your people!"