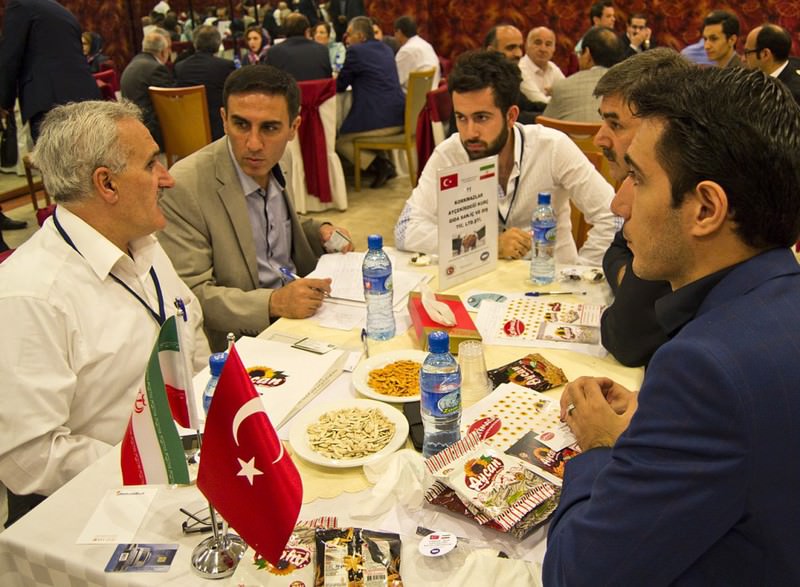 A Turkish business delegation visited Iran at the beginning of the week to hold B2B meetings. Turkey and Iran aim to increase their trade volume to $35 billion and find ways to realize this target.
by Daily Sabah Aug 07, 2015 12:00 am

Iran and Turkey are aiming to reach $35 billion in trade volume. As sanctions over Iran are being removed after historic deal, the two countries are working to launch a free trade zone on their border

The free trade zone project between Turkey and Iran is advancing as Iran seeks to reconfigure its relations with Western countries. The project of establishing a free trade zone on the Turkish-Iranian border was one of the decisions made during President Recep Tayyip Erdoğan's official visit to Iran. The free trade zone will be located in the eastern Turkish city of Van and Hoy in northwestern Iran. The realization of the decision, however, has been a more complicated process than the decision-making, as the laws of the two countries differ in terms of border regulations. As the first phase of the project, the two sides are currently focused on working out the conflicting elements in order to make the border relations more compatible for transactions.

Aegean Region and Iran Cooperation Association President, Hossein Arian, said Iran prioritizes developing trade with Turkey, since Turkey never turned its back on Iran while the Western embargo was in effect. Arian added that they have been preparing for expanded trade relations between the two countries for roughly seven years, as they were optimistic a nuclear deal would eventually be forged. Expressing that the land border between Turkey and Iran is a great advantage, Arian said coordinating logistics and organizing trade fairs are regarded as two of the most important actions to take, while suggesting both countries could benefit from arranging multinational business programs.

Meanwhile, a group of Turkish businessmen visited Tabriz, Iran, and became the first commercial committee to visit Iran since the implementation of Western sanctions. Eastern Anatolian Exporters Association (DAİB) President, Cemal Şengel, stressed that the removal of the sanctions will not only benefit Iran but also contribute to global trade. Şengel said DAİB targeted $10 billion in exports, adding that 120 business meetings took place in Iran with more than 50 of these resulting in an agreement. Şengel then called on the government, exporters associations and all other relevant institutions to act in cooperation in order to achieve their objectives regarding trade with Iran. Underscoring that large companies previously hesitated to enter Turkic republics and Iraq due to their lack of infrastructure, Şengel highlighted that Iran has no such problem. He added that Iran's and Turkey's needs are complementary.

On the other hand, Van Chamber of Commerce President, Necdet Takva, underlined the importance of activating the land border between Turkey and Iran, stressing that the conflict environment along the southern border is unsettling and needs to come to an end. Takva claimed the uncertainty and terror in the southeastern regions of Turkey is delaying the progress of trade relations, while Western countries are proceeding rapidly. Beseeching government officials to create a strategy to access Iranian markets, Takva emphasized that 300 kilometers of the 580-kilometer-long Iranian border is in the eastern province of Van and it is severely underutilized at the moment. The Kapıküy-Razi border gate is only active for five hours a day, while infrastructure problems prohibit transit movement. Takva asked for the improvement of the region's underdeveloped infrastructure, stressing its importance in pursuit of reaching trade goals. Underscoring that they have worked hard to develop relations with Iran, Takva said both Turkish and Iranian firms want to connect with businesses across the border via their respective chambers of commerce.

The sanctions levied against Iran were aggravated in 2012 when they were ousted from the Society for Worldwide Interbank Financial Telecommunication (SWIFT), the Belgium-based institution that proxies international banking transactions. The move led Iranian banks to suffer from problems with international money transfers, which made conducting business more difficult. However, this problem will come to an end within two months, as Iranian banks will once again be linked to international banks following the recent nuclear deal between Iran and the P5+1. Some Turkish banks are considering opening branches in Iran, while Iran-based Mellat will increase its Turkish activities.
RELATED TOPICS