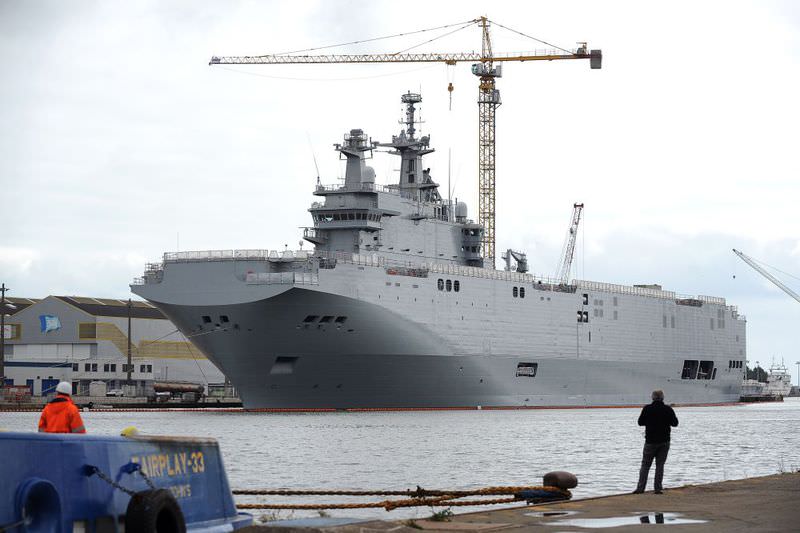 by Associated Press Aug 08, 2015 12:00 am
If you're looking for a boat to carry 16 helicopter gunships, 700 troops and up to 50 armored vehicles, the French may be ready to make you a super deal. After France reached agreement to cancel the sale of two warships it had been building for Russia, the French defense minister was on the radio Thursday talking up the vessels' merits.

"These are good ships," said Jean-Yves Drian, "ships that can serve multiple purposes," from force projection and command to acting as floating hospitals.

The 1.2 billion euro ($1.3 billion deal) for the Mistrals was supposed to be the largest arms sale ever by a NATO country to Russia, but France put the deal on hold after Moscow's 2014 annexation of Crimea from Ukraine. Le Drian said a number of unspecified countries have "made their interest known" in the boats, which are similar to the U.S. Navy's San Antonio class of amphibious transport dock ships.

Finding another buyer, or buyers, may not be quick or easy, and may require the French to engage in creative deal-making, Ben Moores, senior defense analyst at IHS Jane's, a London-based defense research company, told The Associated Press.

Over the next 10 years, Moores said, there will be an estimated demand for 26 ships like the Mistrals in countries that France can trade with legally. Those potential customers range from France's NATO allies like Turkey and Canada to India, Australia and Singapore.

"A problem for the French is a lot of those countries weren't expecting deliveries to occur before 2020," said Moores. "So they won't have money immediately in their budget to pay for those ships."

Whoever ends up with Mistrals, which are now at a shipyard in the western French city of Saint Nazaire, will need to repaint them to cover up the Russian Navy names and markings they now bear.
RELATED TOPICS