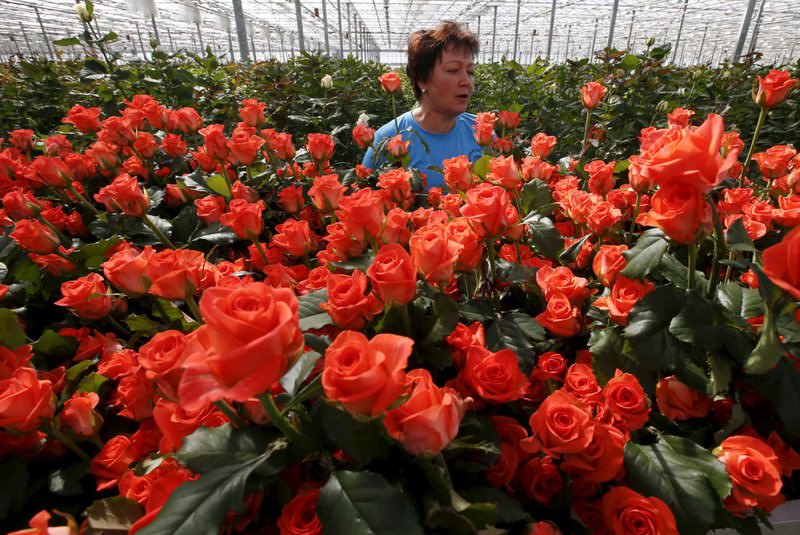 An employee works with roses at the ,Podosinki, greenhouse complex in the village of Orudyevo north of Moscow.
by Aug 13, 2015 12:00 am

Russian officials allege Dutch flowers may be infected with bugs. Critics say it is Moscow's retaliation for a Dutch investigation into the downing of a Malaysian airliner over rebel-held east Ukraine last year

A week after angering many in Russia by burning illegally imported Western food, authorities

have started feeding Dutch flowers to the flames. Officials say blooms from the Netherlands, which supplies much of Russia's $2.5 billion flower market, pose safety risks because they may be infected. Critics say the "flower war" marks a new low in relations with the West and is Moscow's retaliation for a Dutch investigation into the downing of a Malaysian airliner over rebel-held east Ukraine in July last year.

Whatever the reason, ordinary Russians, already struggling with unemployment and inflation, can expect higher flower prices in the next few weeks when demand soars as children returning to school traditionally give flowers to their teachers.

Slakova, explained as television showed workers burning boxes filled with roses. Authorities are now considering a ban on flowers from the Netherlands, which sends up to 5 percent of its flower sales to Russia. "We just have to check every shipment of the flowers ourselves," said the Russian agricultural watchdog's spokesman, Alexei Alexeyenko. Relations between Russia and the Netherlands collapsed following the downing of Malaysia Airlines flight MH17. Dutch investigators blame Moscow-backed separatists for shooting the airliner down with a Russian-made missile. Russia denies involvement and blames Ukraine for the tragedy, which killed all 298 people on board. Most of the dead were Dutch. Last month, Russia vetoed a resolution co-sponsored by the Netherlands to set up a U.N.-backed tribunal to prosecute the culprits.

"The Russians are searching for any reason not to let our flowers in. We know this is politically motivated," said a spokesperson for a Dutch flower firm, who asked not to be named. "No flowers will be sent to Russia until the situation changes. Our red line is that the flowers are inspected on Dutch soil rather than in Russia," the person added.

Following the downing of the plane, the West imposed sanctions on Russia. Moscow retaliated by imposing a ban on most Western food imports, which backfired by spurring inflation. Last week, Russian TV showed quantities of illegally imported European cheese being bulldozed while workers threw boxes of European bacon into an incinerator. Russia insists the issue with Dutch flowers is that they contain bugs that the European Union does not recognise as dangerous.

"As prices spike, we expect the Russians to initiate a solution to the problem," he said. "At the moment, we don't have the means to exterminate all the organisms that are unwanted by the Russians. We want to use biological, not toxic means to eliminate these organisms and developing that technology will take time." VGB says Dutch flower exports to Russia were worth 107 million euros in the first half of 2015 but other estimates put the figure higher due to black market trades. Russia mostly imports roses, chrysanthemums and tulips with foreign supplies accounting for more than 80 percent of overall sales, one third of which come from the Netherlands. Analysts think prices could jump by over 50 percent if an import ban is imposed, although Russian growers and exporters in Kenya, Ecuador, Colombia and Israel could benefit.